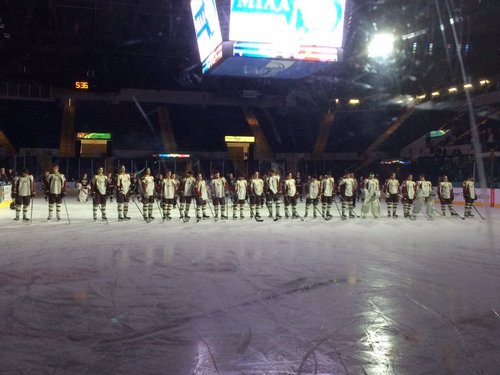 Above: Gonk Hockey beat down Westfield in the state semi-finals last night. This weekend, they’re heading to the Garden for the first time in team history. (Photo tweeted by @ARHSAthletics)

Expect to see a lot of THawks at TD Garden this Sunday. ARHS Boys Ice Hockey continues making history this week. Last night, they earned their spot in the state finals.

On Monday night, the Boys battled their way to their first Central Division 3 title for the first time in the program’s history.

On Thursday night, they faced Westfield in the state semi-finals, a school with three past state titles, the most recent in 2013. But the THawks continued their winning streak. And unlike the previous two contests decided in shootouts, they bested their rivals 6-2.

In another milestone, the team celebrated Captain Alex DiPadua’s 100th scored point during the game.

This Sunday afternoon at 1:00 pm, the Boys will face the Hanover Indians. The Telegram posts:

Hanover last played in a state championship game two years ago and won a state title in 2007. It is the fifth trip to a state final game for the Indians.

If you’re looking to cheer the boys on, you can find ticket information here. For less than $13 per seat (including fees), fans can root for Gonk Hockey, and even take in 5 other high school face-offs that day.

Congratulations!!! I am wondering if someone from the team could post the names of the team members? This is an incredible accomplishment and I would love to see the names of these great players.

You can see the roster here. The boys are one of the few teams doing a great job of keeping the public informed. They love to use twitter and have their own blog with news, photos and more.

Great job, guys !
Will the game be televised? If so, what channel?
Or will SAM record it?

I highly doubt SAM will record it. I doubt they would have the rights to. I don’t know that anyone will record and broadcast the full game. But I do know that for all the recent games, the telegram posted several videos, masslive.com also posted at least one, and some fans posted and tweeted highlight videos. Taken by their smart phones. I will share whatever I find tomorrow.