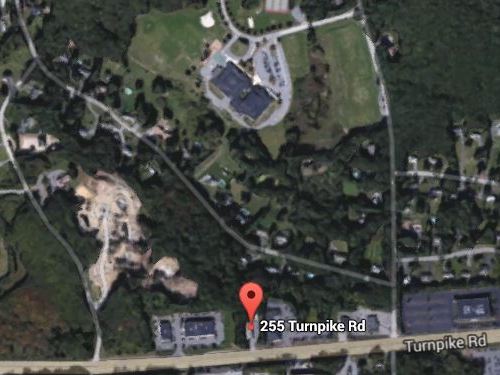 Above: The planned site for a medical marijuana dispensary may be temporarily immune to zoning use changes. (Image cropped from Google Maps)

Southborough Wicked Local reports that the Planning Board signed off on the ANR permit plan for 255 Turnpike Road. The landlord for CommCan was seeking the approval to freeze zoning use for three years.

The action was taken to thwart efforts of residents to zone out a medical marijuana dispensary.

An Article on the Warrant for the April 11th Town Meeting would extend the school buffer zone to 1,000 feet. The parcel on Route 9 between Parkerville and Deerfoot Roads is about 630 feet from Neary School, which complies with the current bylaw’s 500 foot buffer.

As I shared earlier this week, the board put off approving the ANR application on Monday night. Members sought advice from Town Counsel Aldo Cipriano. According to the article, Cipriano confirmed that the board’s hands were tied.

Failure to act by this Friday would have caused approval by default. And the board is legally compelled to approve an ANR application unless it doesn’t meet requirements.

The Planning Board held a meeting at noon yesterday to discuss and approve the application.

At Monday night’s meeting, Planning Board members weren’t positive that the business would be grandfathered. The SWL article doesn’t state if Cipriano shared an opinion on that.

The article also doesn’t explain what happens after three years if changes to the zoning bylaw are approved.

In a past Board of Selectmen meeting, Town officials seemed to believe that a special permit from the ZBA would likely grandfather the business from future zoning changes. In last week’s meetings, Cipriano indicated that the zoning laws are “complex”. He said anything that happened at Town Meeting would have to play out.