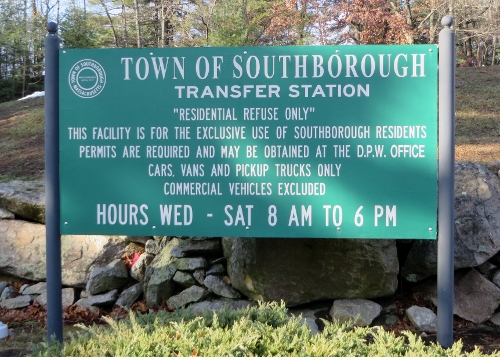 Above: Article 32, if passed, would allow selectmen to redefine the fines for violating Transfer Station policies every year. (Photo by Beth Melo)

As promised, I’m continuing to look at what voters will be deciding at next Monday’s Annual Town Meeting. Today, I’m highlighting Warrant Article 32: Transfer Station violations and fines.

The proposed bylaw would give the Board of Selectmen the authority to define fines annually.

[It seems straight forward enough. But given past reactions to changes at the Transfer Station,  I never know how readers will react!]

This isn’t a power grab by the BOS.* The change was proposed by the Green Technology & Recycling Committee and supported by the Public Works Planning Board.

The recommendation came out of discussions the committees had in reviewing Transfer Station policies and fee structures.

Selectmen already vote to approve the Transfer Station policies each year. But the fines for violating the policies are currently specified by a bylaw.

Right now, fines are $100 per violation of rules and regs, after a warning letter for the first offense. Additionally it defines a $250 fine for entering the Transfer Station without a valid sticker.

Revisions would strip language specifying the amounts and replace it with “Fines are set annually by the Board of Selectmen”.

The change could presumably allow selectmen to decide that some offenses deserve higher/lower fines. And they would have the flexibility to readjust each year without going back to Town Meeting.

The bylaw would still protect residents’ right to receive a warning for a first mistake. The change may even extend that protection to transfer station trespassers. (My layman’s reading of the current bylaw is that the fine for entering without a sticker isn’t after a first offense. With that sentence removed, it seems that “after the first warning letter” would apply to any and all violations.)

To read the full text of the Article, click here.

*In fact, the BOS initially balked at including the Article in the Town Warrant. But the discussion centered not on fines, but on a process laid out for selectmen to rule on violations. The draft Warrant discussed at that January 5th meeting wasn’t in the packet. So, it’s unclear whether the version in the Warrant has since been revised or the nature of the bylaw changes were misunderstood.

I would prefer to keep control of that issue with the tax payer.

how do you get to the swap shop after recycling

You can’t, you have to go all the way around again. Pretty sure this was by design to discourage use so that over time as usage continues to drop they can eventually close the swap shop down. Or… maybe I’m just cynical, but I actually prefer to believe this, than to believe that they actually thought the current implementation was functional.

However, a number of times I’ve been though the area, a large truck has blocked the entrance to the Swap Shop, so that to access it, you have to make an illegal right turn.

Has anyone else noticed that the “pickings” at the Swap Shop have been going down in quality and quantity? I wonder how much of what would have been put in there has been dumped into the compactor because the donor didn’t want to make a second pass through the whole station to go to the Swap Shop after dropping off their recycling. The alternative would be to walk it over from the recycling area, but you have to go around the fence to do that since the gate behind the mercury shed is not zip-tied closed. Why have a gate there at all?

Not to mention the metals area. I’ve already seen a few items broken that could have otherwise been recycled. As one example, a beautiful Victorian-style ceiling light that had a corner broken off of it when it was tossed over the side at the new drop-off area.

Southborough resident: YES: Unfortunately the “pickings” are lack luster and borderline garbage. But we knew this was coming with the separate dump permits.
I saw that the gate was zip tied yesterday, yes what’s the issue? People are still going to walk around as I did and others along with me.
There’s no thought into relocating the swap shops and this what happens when the wrong people are in charge. If there is a board that deals with this someone please tell me. !
There also is lot’s of grumblings about the steel bin being closed. Often times; there would be many items that could be reused and that people have taken advantage of.
All my kids bikes, battery powered cars and power equipment have been sourced from the steel bin and have been passed on to others in need. Want to make a kid smile give them a bike.
It was mentioned to me by one of the transfer station employees that soon as the gate is closed someone would get hurt. He gave example of leaf bin and dumpster,”since they have gates”. According to the selectmen there is no money made from the steel bin contrary to what has been stated on past blogs. The town basically gives it away.
For a time scrap was worth $300 dollars a ton, now alot less. Example remains that the town could of generated money from the steel bin and no one was aware/cared.

Also while we’re on this subject of “Swap Shop” there are some that make a living off of the goodies inside. Yesterday there was a couple that came and had a massive pile behind their vehicle. I know for a fact that they sell the stuff at local flea market. They camp out there. At least don’t be so obvious. I guess no one sees the 15 minute sign.
Getting back to Southborough Resident’s mention of lack of quality items; they’re getting sucked up by a handful of profiteers.

I also forgot to mention, Yesterday as on past weekends there is one truck I see again and again at the dumpster dumping building materials in by the truck load.
According to the rule the most you can bring is 30 gallon pail for each trip not a truckload.
I pointed that out to the transfer station employee.

If they are complaining about lack of recycling and cost of tipping waste why should we the townspeople have to pay for someone’s remodeling project.