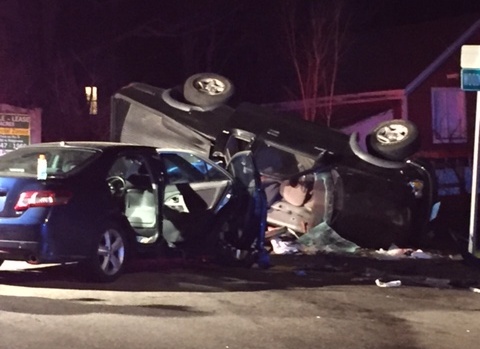 Above: Alcohol may have contributed to a serious crash in Southborough this past weekend. (image cropped from photo submitted by Southborough Police Department)

Southborough Police are investigating a serious crash that took place at about 2:36 am on Sunday, April 24. The collision at Woodland Road and Route 9 East resulted in “serious, but not life threatening” injuries to both drivers and three passengers.

The SPD is asking for anyone who witnessed or has information related to the crash to contact the Detective Division at (508) 485-2121.

The driver (and sole occupant) of a Toyota Tacoma had to be extracted using the Jaws of Life. The other driver and passengers were in a late model Toyota Camry. The release indicates alcohol was a likely factor, but doesn’t clarify which driver(s) had been drinking.

Click thumbnails below to open the original press release and photo, plus photos from the Southborough Fire Department’s Facebook page:

The SPD has also released its latest logs, covering Thursday through Sunday.

Reports include a business owner’s complaint about stolen lawn signs and three arrests. Read about those incidents and more below.