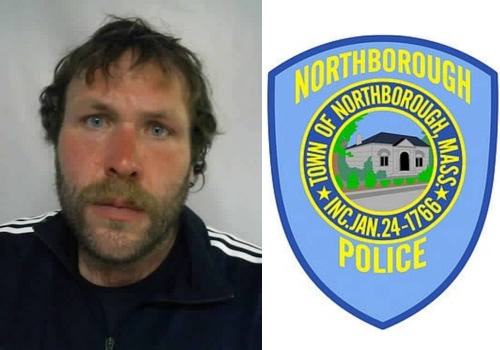 Above: Northborough Police are asking the community if they’ve had any contact with a man alleged to have verbally “sexually accosted” two girls near Algonquin yesterday afternoon. (photo from Facebook)

Northborough police tracked down a man accused of making sexual comments to two girls near Algonquin. The NPD brought in a K-9 to help with their search, which ended in arrest.

Northborough Police Officers are attempting to locate a white male who approached two 16-year-old girls on the hiking trail behind Algonquin Regional High School at approximately 3:40 p.m. this afternoon. The male made sexual remarks before the girls walked away from him. He is described as being heavy-set, in his 40’s, with a scruffy grey beard and wearing a dark navy blue pajama bottoms and a grey hooded sweatshirt. The two girls were not harmed or chased by this person. The incident occurred on the section of the trail between the high school athletic fields and the Route 20 trail head.

A K-9 is en route and Police Officers are in the vicinity. Please call us at (508) 393-1515 if you observe his person or have any pertinent information to help identify him. Thank you.

The male subject has been identified and is being interviewed by Officers. He has mental health issues.

Later, police confirmed the arrest of a suspect who will be arraigned at Westborough District Court on “a number of charges”.  Northborough Wicked Local is reporting that a press release lists those charges as:

Updated (4/28/16 4:41 pm): Almost an hour after I posted the original story, the Northborough Police posted an update with the above photo, stating: “If you have been approached by this man, please call Detective/Sergeant Brian Griffin at our Detective Unit at (508) 393-1522.”

And just an hour ago, a comment further updated result of today’s court hearing:

Subject is being held on a $10,000.00 bail, with GPS monitoring and strict restrictions if he does make bail.

Every girl should carry MACE. 10% MACE. There are to many of the incidents happening. When my daughter said they were doing something on that trail I said do not ever go out there without protection. The creeps are on the increase everywhere.

100% agree mike! I say the same with my family too! Carry mace! It will protect you.