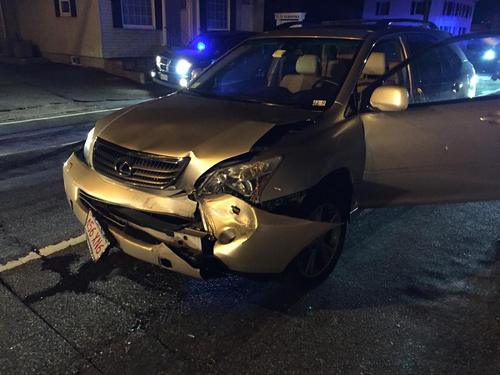 Above: A drunk driver crashed into a Southborough Police cruiser on Route 9 in the middle of the night. (photo from SPD)

A Southborough police officer is home recovering from a crash. Officer Patrick Smith was rear ended by a driver at 1:56 am this morning, while stopped at a red light on Route 9 West at the intersection with Central Street. At the time of the crash, Officer Smith was on patrol duty.

It is the third time in just over eight months that a Southborough officer has been struck by an “under the influence” driver.

According to a press release, Officer Smith was transported to Metrowest Medical Center in Framingham for “complaints of pain”. He was treated and released. Chief Kenneth Paulhus reports that Smith will be out on injured status until further notice.

The driver was booked and placed in lock up pending a bail hearing. The Southborough man will face charges of O.U.I Liquor and Negligent Operation of a Motor Vehicle.

Last August and September, two other Southborough officers were rear ended by drunk drivers while stopped on Route 9.

This is sad. I hope that the officer is OK. Wondering if there is a problem with the new LED lights on the cruisers. They are sooooo bright. Perhaps if there were a day mode and a muted night mode? I have had problems driving past cruisers at night with the new lights and had to look away.

Let’s blame the LED lights on the cruiser for being too bright, not the drivers inability to be an adult and drink responsibly. Makes sense.

That is nice. Make a constructive suggestion and get dumped on. Yes people should drink responsibly.

Southern Breeze makes a good suggestion about the lights. I too have been distracted at night by the bright strobe lights, especially by the Trooper’s cars on the side of the Mass Turnpike.

I have noticed that all of the State Police cars now have large white chevrons on the rear of the cruisers and I hope that change makes it safer for the Troopers when they are parked on the side of the road.

I’m dating myself now, but I’m old enough to remember a time when police cars had a single “bubble gum’ light on the roof.

But, yes, the lights on emergency vehicles should be dimmed and synchronized. If you notice the newer state police cars, the light bar comes on all at once, and flashes occasionally, and at night they dim. Much better!

I remember those too, Jim.
This new generation of lights are so much more overpowering than anything we grew up with.
I also find it very confusing to understand when/how you’re to get off Route 9 and exit on to roads like Parkerville or Route 85 or Middle… I think there’s supposed to be a small gap in the cones but it is very small indeed.

In two of the three cruiser accidents, the vehicles were approaching or stopped at intersections… lights NOT activated. The third was a cruiser inside a work zone with emergency lights on. And perhaps someone more qualified can correct me if I’m wrong, but the new lightbars do, in fact, have a day and night setting.