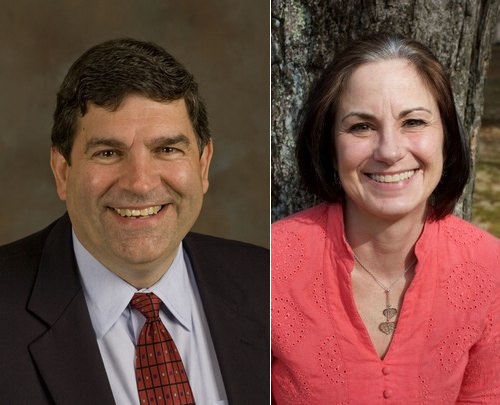 Above: Southborough has a new Town Moderator and Planning Board member. (contributed photos)

Yesterday, 12.09% of Southborough voters weighed in on who should sit in important seats of our Town government. Stephen Morreale and Meme Lutrell were the clear winners for Moderator and Planning Board.

Other seats in the election were uncontested, though apparently some voters wished otherwise.

Candidates for uncontested positions only garnered 69-74% of possible votes. Many left blanks. But there were also write-ins, including 32 for the two Board of Selectmen seats and 12 for the Southborough seat on the Regional School Committee.*

Both Lutrell and Morreale may have partly won their seats through active campaigning. On the other hand, perceptions about activism may have assisted both in contrasting ways.

Lutrell, the current Chair of the Open Space Preservation Commission, is a familiar face at Town Meetings and publicly broadcast Planning Board and Board of Selectmen meetings. She ran against Craig Nicholson, the Chair of two less publicly visible committees: SHOPC and the Recreation Commission.

Both Planning Board candidates had several signs around town. But Lutrell was also frequently seen around Town waving her signs for the past month. (Places that I spotted her include outside Town Meeting, at the Transfer Station entrance on 85, and at the end of Woodward driveway yesterday – the precinct 1 polling station).

In the Moderator’s race, competitors Bill Boland (former selectman) and Desiree Aselbekian (Public Works Planning Board Chair) were probably the most familiar faces and names at the start of the campaign. But Morrealle, former Personnel Board Chair, was the only candidate to put out campaign signs.

At Candidate’s Night, Boland quipped that “signs don’t vote”. He pointed out that the majority of voters should be familiar with all three candidates from past service to the Town. And Aselbekian maintained there are other ways to campaign and reach voters.

Both were responding to a question from Sam Stivers, who posed that candidates should show voters they want the job by publicly campaigning for votes. He pointed out that Morreale had already spent a day at the Transfer Station campaigning. Aselbekian stated that she would be there the following two weekends. Boland explained that other time commitments were keeping him from spending a day at the station.

In the end, Aselbekian only captured 182 votes, followed by Boland with 161 votes. Morreale was elected with 493 votes.

Still, I may be putting too much stock in sign posting and waving.

Morreale’s frequent message to voters was that he would be an objective voice as moderator. He argued that the moderator shouldn’t be an “activist” or take positions on Town matters. That may have resonated with voters who have seen both Aselbekian and Boland argue for and against articles on Town Meeting floor and comment at public meetings.

And Lutrell has been a long time advocate for Open Space, which may have earned loyalty and trust with some. Nicholson tried to convince voters that his experience on the other side of the table was valuable. He argued that his job as a Real Estate Developer didn’t mean he was “pro-development”. But it may have raised concerns for some voters.

Feel free to comment on why you cast your vote yesterday. (But, please keep it civil!)

*Editor’s Note: Those write-ins for the BOS and Southborough seat on the Regional School Committee accounted for less than 2% of possible votes for those seats. But they were significant compared to other positions. The K-8 School Committee had 6 write-ins. Other seats had only 1-3.

Congrats to the winners and thanks to all who ran. Your desire to provide your services and expertise to the Town is much appreciated.

Congratulations, Steve and Meme. Southborough is so lucky to have you both!

Congratulations to Steve and especially Meme.

Good luck to all that were elected yesterday by 12.6% of the voters. I have been voting for 42 years, have never missed an election, and like thinking that my vote counts. I find it shameful that the other 87.4% did not take this election seriously, especially when there were 2 contested races. Maybe our elected officials should put on their “thinking caps” and get a little more creative in presenting the Town’s issues to the public so more people would want to be involved!

0
Doreen A
Reply to  Beth Melo

Thanks for that stat update. Even more pathetic!

0
SouthboroDave
Reply to  Doreen A

Is permanent absentee an option yet?

Permanent Absentee Voting is allowed if you send me a letter from your doctor stating that you are permanently unable to cast your ballot at the polling place due to a physical disability.

Absentee voting rules are established by the Secretary of State. You can vote by absentee ballot if you:
1) Will be absent from Southborough on election day.
2) Have a physical disability that prevents your voting at the polling.
3) Cannot vote at the polls due to religious beliefs.

Obtain an absentee ballot by clicking this link or stop by the Clerk’s office and we’ll help you fill one out.

You can read all the details at this link:
http://www.sec.state.ma.us/ele/eleifv/howabs.htm

People can file an absentee ballot request for all elections in a year. Just check the block “ALL ELECTIONS” on the absentee voting form.

If you or your college children will vote by absentee ballot, make sure you mail the ballot AT LEAST a week before the election day.

Thanks! I lived in CA in the past and I could sign up for permanent absentee ballot for no reason at all. It was simply more convenient to vote on your own schedule and it increased my participation especially in smaller state/town elections. I wish MA had less stringent rules.

0
Al Hamilton
Reply to  Doreen A

“Maybe our elected officials should put on their “thinking caps” and get a little more creative in presenting the Town’s issues to the public so more people would want to be involved!”

One way to improve turnout is to have contested elections. Turnout is much higher when there are multiple people running for the BOS or the School Committees. These are thankless jobs where the best you can hope for is endless blaming and second guessing. I have called out various elected officials when they have behaved badly but I also appreciate their tireless service that often goes unseen and unappreciated. Showing appreciation instead of constant hectoring to solve all our problems and trashing them when they try would go some distance towards making serving out community more desirable.

Of course another way to improve turnout is if I run again. That will motivate a lot of people (for my opponent)

You cannot blame our elected officials when there is a low turnout or the fact there are uncontested races. You can blame the citizens that are apathetic and just don’t care. I have never understood why people do not exercise their right to vote. Even in a state where anything but a Democratic vote doesn’t count, or states where a Republican vote is the only once that counts, it is still our duty and right to vote anyway! Is it laziness, apathy, no choice, or a just don’t give a darn attitude? I have no idea, but laying blame or expecting our elected officials to solve the problem is short sighted and lays the responsibility on the wrong people.

0
Doreen A
Reply to  Anita Reeder

Anita & Al,
I am well aware that our town officials have a thankless job and I certainly couldn’t do what they do. I just feel that they signed up for it, nobody “twisted their arms” and perhaps they could help in getting more people involved in our town government.

0
Tim Martel
Reply to  Doreen A

My opinion is that the majority of residents in Southborough are happy with the status quo and don’t feel the need to sacrifice their limited free time to change something that isn’t broken. When a contentious issue arises, people speak up and come out to vote.

I think Tim’s opinion on this subject is 100% accurate.
And I think it is also relevant in the discussion of low turn out at TM.

Well, this voter is so happy that he almost ran out of ink in the ballot box writing in names. Glad to see a few others start the same practice.

I wonder how the Main St project would have faired if put on the ballot? I wonder if it would have drawn a few more voters.

Frank,
I have worked the polls for nearly 30 years and have never seen unofficial write-ins win a position for which someone wrote their names in. All you accomplish by doing unofficial write-ins is to guarantee that the poll workers will work more hours than the 7-12 hours they already put in so you and others can exercise your right to vote. Write-ins can not automatically be counted so must be hand counted and recorded,
If you really want to make a statement, have the person you wish to be voted on become an ‘official’ candidate with a sticker campaign. I have always wished that everyone who writes-in be required to come work the polls from morning til night to see the challenge of a long day and then count all the write-in votes to see the impact..
I applaud that you go and vote, but not that you do write-ins!

I find it very disconcerting that someone who is a town employee and has a role in supervising elections should take it on themselves to tell someone how to vote. The last time I checked, Frank was free to vote as he pleases.

I did not think I could become more disillusioned than I already am. Is it true, Barb, you are a town employee?

Could not make it to town meeting due to business travel. Probably just as well since I would have voted the opposite of almost every majority. And now the way I vote causes extra work and therefore I should change the way I vote.

But rest easy – I will leave the town to the townies from now on.

Barb,
I appreciate your comments. I did not write in but was tempted to. Now I realize that if I were to do that just as a statement of frustration (as I believe some have done this year), then it is placing an undue burden on the poll workers. Perhaps just leaving blanks on the uncontested positions makes enough of a statement.

Thank you letting us know.

If one doesn’t vote it just gives more value to the one’s who do. No harm in that. Each voter is more like a super delegate speaking for 15-20 residents. Of course the flip side if you do not vote you really have no seat at the table and any complaints should rightly fall on deaf ears. Typically when seats are uncontested that means voters are satisfied if not pleased with the incumbent. Nothing wrong with that.