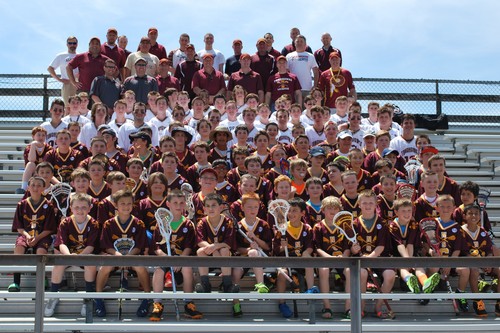 Above: Youth and high school players honored the founder of the Tomahawks Lacrosse team. (Contributed)

John was the very first lacrosse coach for the Tomahawks as the founder of the high school program.

John passed away recently at the age of 69. A life long resident of Northborough, John was proud to call Northborough his home. Mr. Schunder graduated from Algonquin Regional High School in 1964. He then continued his education, graduating from Nichols College in 1968. John excelled as a football player. As an All-American lacrosse player, John was inducted into the Nichols College Hall of Fame. John started Algonquin Regional High School’s boys lacrosse program and became the team’s first coach.

A recogniniton of John’s life was held on Saturday morning, immediately followed by a Boys Lacrosse varsity game. A U9 half time game was held on the field. And all of the lacrosse players in the youth and high school teams wore a commemorative patch for Schunder on their uniforms.

Hi my name is Bridget Schunder. I was wondering if there is anyway for me to order the above photos and article? Can some one please let me know by email or phone 774-270-4226