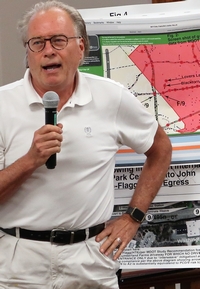 Right: David Schwartz was one of the residents questioning a ZBA decision to allow left turns onto Flagg Road despite MassDOT’s 2013 recommendation to prohibit it. (image contributed by Allan Bezanson)

Last night, the Zoning Board of Appeals was scheduled to reorganize leadership. According to Southborough Wicked Local, the full board meeting to choose a new Chair didn’t take place. It will be scheduled for a future date, with Andrew Dennington expected to take the head seat.

But Chair Leo Bartolini did hand over the reigns on the Park Central project to member David Eagle. Eagle, Bartolini and Paul Drepanos will continue to be the three members overseeing the project.

At last night’s hearing, residents continued to take issue with traffic safety from the project turning left onto Flagg Road.

[Editor’s Note: Some context from project history – Some residents appear to have been reinvigorated by learning that MassDOT released a report in 2013 recommending that turning left onto Flagg Road should be prohibited.

“I am really interested in understanding how the traffic analysis issues is resolved and over,” he said.

His presentation was greeted with applause.

“This is not the forum for applause,” Eagle said.

Throughout the meeting, Eagle had to try to calm down the at time raucous audience. He asked for everyone to be respectful of one another.

“We thought the traffic discussion was over,” [Catanzaro] said. “Other than addressing possible conditions related to traffic we have nothing else to with traffic.” . . .

Depietri said they’ve been talking about traffic for 18 months and have completed four traffic studies.

“Not that I don’t want to talk about it anymore,” he said. “We just keep bringing up the same issues over and over again.”

As for progress on the project:

Developer Bill Depietri said he thinks the company is on the same page as the Conservation Commission and has made several changes to the site plan during an ongoing hearing with the Planning Board.

Traffic that poses a foreseeable, imminent, heightened,, and reckless danger to surrounding residents is anything but a losing argument. In fact, it is what any lawyer would begin to build on in a negligence lawsuit. . . placing the Town of Southborough in a highly vulnerable position at the very first injury and accident that results from the Park Central.