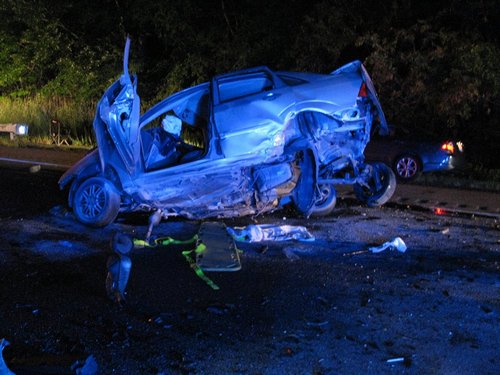 Above: Southborough Fire Department posted this photo and more of the battered cars from the horrific scene they responded to Monday night. (image from Facebook)

State police have revealed more details on the crash that took place Monday night in Southborough on the MassPike.

Apparently, the driver from Rutland was apparently headed the right way before making a U-turn in the breakdown lane. The resulting accident, killed him and put 5-6 others in the hospital.

Southborough Fire Department revealed on Facebook this week that they were one of the teams who responded to the crash:

The victim of the crash in Southborough just before midnight Monday that involved three other vehicles was identified as 28-year-old Timothy Auger, of Rutland. Police originally said the crash was in Westborough.

Police say Auger was headed west before doing the U-turn and driving east in the westbound lanes.

He sideswiped one other vehicle before colliding head-on with two more. Six people in the other three vehicles required hospitalization.

I encountered a one way driver on the Pike earlier in the week, but in the Boston area. The Pike was lightly traveled at the time, so I was able to get out of the way. It makes me wonder how how frequently this occurs.