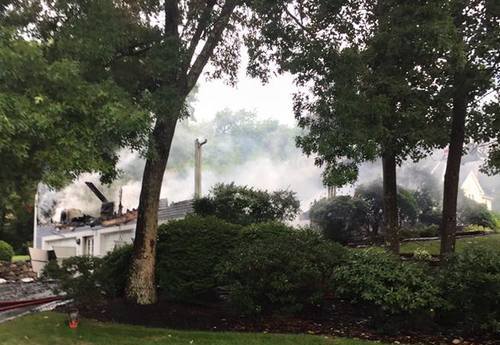 Above: Where a 2-story home used to stand, by Sunday morning only the shell of the garage and smoke remained. (image cropped from Southborough Fire Department Facebook page)

Over the weekend, Southborough’s White-Koltz family lost their house to a fire. Neighbors immediately began rallying to help the couple. Now they are sharing how others in the community can pitch in. And the homeowners are sharing their immense gratitude to the community.

Neighbor Gerry Pyne heard and spotted the fire after 5 am on Sunday. That was several hours after ferocious lightning shook their neighborhood.*

His wife Susan told me they had some anxious moments, uncertain if the owners were home. But a friend in the area was aware of their travel plans and helped track the couple down. Rachel White and Joel Koltz were out of town for their daughter’s wedding that night.

Susan Pyne said that neighbors began reaching out immediately, including generous strangers and the supportive firefighters. Koltz and White tell me that the response has reassured their faith in humanity.

In the beginning, the couple stayed a neighbor’s home. But being in the area proved too difficult. They are now in a nearby hotel.

The couple has already met with the insurance adjuster. But it will be a long road to getting their home rebuilt. Koltz says for now they are trying to focus on how to get through a few days at a time.

To help them grapple with the loss of all their possessions, friends have setup a GoFundMe page. (Click here to contribute or learn more.) Neighbors have also organized a collection of Target, Stop & Shop, and Natick Mall gift cards. You can donate cards by mailing them to the White-Koltz family at 1 Michael Circle, Southborough, MA 01772 or dropping them off at St. Matthew’s Church.

The homeowners are still reeling from the loss. But in speaking to me, they wanted to focus on their appreciation. The couple said they are overwhelmed and humbled by the incredible generosity of the community. It keeps bringing tears to their eyes.

Koltz said that the community response has been so strong, it ratifies they made the right decision to move to Southborough 25 years ago. He said that he’s sure many towns would have rallied. But they have seen that they are surrounded by very special people here.

They were especially grateful to the Pynes. Koltz said that he didn’t know how they would have gotten through Sunday without their support.

*According to Southborough Wicked Local, Fire Chief Joe Mauro believes the fire was likely ignited by the round of lightning at 11:30 pm Saturday. That would mean it was burning for several hours before it was detected. Mauro assumes that air conditioning units played a role in masking the sound from neighbors overnight. By the time neighbors were aware, the house was fully ablaze.

Susan Pyne told me that the lightning was so loud Saturday night, they and other neighbors worried their own houses had been hit.

Updated (8/16/16 5:52 pm): Natick Mall gift cards were added to the list, to allow the couple to purchase work appropriate clothing and shoes.  And St. Matthews will collect cards from those who don’t want to mail them.

Sunrise Home Improvements has been located here in Southboro for the last 30years. We are family owned and run with exceptional experience with insurance claims. We would love to give the White-Koltz family the help they need to get back their home the way it was or better! Please give us a call at 508-481-2411 and we can set up for Tony to come meet with you!

Sunrise tree has been located in town for more than 30 years but Sunrise Home Improvements has not, more like 10. On insurance work they didn’t give a quote for a neighbor that used them. They in fact charged the exact amount the insurance check was issued to homeowner and wouldn’t start the work until they saw the check.