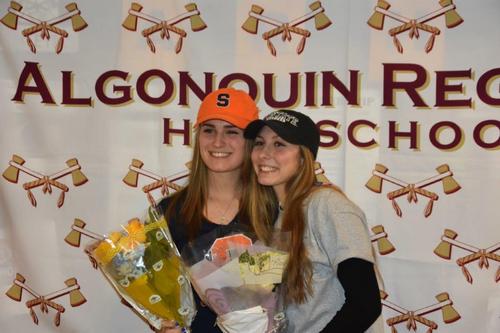 Above: Southborough’s Kate Hostage and Meg Stassi celebrate their intent to play for Division I teams. (contributed photo)

Kate Hostage and Meg Stassi signed letters to play soccer. The girls both started out as Southborough Youth Soccer players when they were little.

Next year, they’ll be playing for Division I Women’s Soccer teams.

Hostage will attend, and play for, Syracuse University.

Stassi is headed to University of South Carolina Upstate.

Not all of the following is as Southborough specific. But there is more news worth sharing on athletes/teams in our districts: