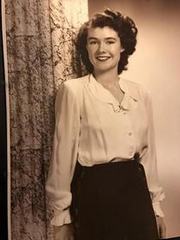 Patricia( Adams) Slaughter, 89, of Southborough and formerly of Winter Park, Florida died Thursday, February 23, 2017 at Beaumont Rehabilitation and Skilled Nursing Facility in Westborough, after a long illness. She had been a resident of Beaumont for over five years, prior to that she was at New Horizons in Marlborough and previous to that she was a twelve year resident of Southborough.

Patricia was born in Boston, the only child of the late Albion and Marie Adams of Boston. Patricia is pre-deceased by her husband Albert Slaughter and her only child, James Bond Slaughter. She has one grandson, Ross Slaughter in North Carolina. She leaves behind several relatives: Nancy Schriner of Spokane, Washington, Gerald Skelton of Billerica; Walter Skelton of Boston; Joan Brown of Canton; Greg Skelton of Canton; George Moran of Marlboro; Martin Moran of Southborough; and Maryanne Moran Cole of Framingham and their respective families.

Patricia attended Girls’ Latin School in Boston and then Edgewood Park School in Briarcliff, New York. She joined the United States Foreign Service in 1950 and spent the next fifteen years working for the United States government in embassies in Germany, Lebanon, Ethiopia, Uganda, and Haiti. She married her husband Albert Slaughter, who also was a member of the Foreign Service. At the end of their foreign service experience they were assigned to Washington, D.C. When she lived in D.C., Pat worked for the Department of Food and Drug as well as Social Security Agency. After her husband retired from Foreign Service, the family moved to Winter Park, Florida. While living in the Orlando area she received her Associate of Arts Degree from Rollins College. Pat was an active member of St. Margaret Mary Church in Winter Park, Florida and a volunteer at Florida Hospital. She enjoyed history and politics, was an avid reader, and enjoyed outings with her nieces Joan and Maryanne at Kennedy’s Restaurant in Marlborough.

A Mass of Christian Burial will be held on Friday, March 10, at 11 Am at St. Matthew Church , 26 Highland St., Southborough.

Arrangements are under the care of the Morris Funeral Home, 40 Main Street, Southborough. To leave words of condolence tot he family, please visit Morrisfuneralparlor.com.