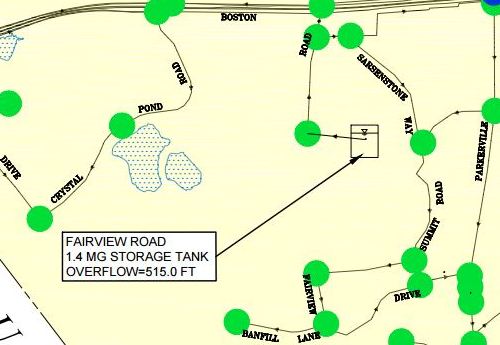 Above: The “Pare report” for Public Works identified Fairview Hill as the best spot for a water tank to meet increased needs resulting from a large development at Park Central. (image cropped from report)

On Monday, the Public Works Planning Board is scheduled to review a report on a proposed water tank. In the meeting they plan to work on a recommendation to selectmen on building a new water tank in town.

Some residents are concerned that the board will continue to focus on Fairview Hill as the best option for the site.

A large potential development at Park Central appears to have triggered the Public Works review of the Town’s future water needs and how to handle them. The report by their consultant, Pare Corporation, explains:

While the need for additional storage has been an issue for many years, it has become even more critical with the prospect of the proposed Park Central development. The Park Central development could significantly increase system demand, and includes certain land areas that are too high to be served by the existing system storage tanks.

Pare consultants recommended against a proposed site at Park Central. Instead, the report recommends building a tower on Fairview Hill as a better option for the Town.

Residents in the neighborhood of Fairview and Sarenstone were alerted by mail about the potential last year. Concerned residents attended a meeting with the Public Works Department to ask questions about the project. (And probably to push back on the recommendation.)

According to Margarite Landry of Deerfoot Road, she and others weren’t satisfied with answers they got. Now she is concerned that no letters went out alerting neighbors to this Monday’s Public Works Planning Board meeting.

The letters weren’t required since this isn’t a public hearing. But it is a public meeting, so residents are allowed to attend. Landry asked me to help get the word out.

You can read more about the tank and issues in my December post on the topic.