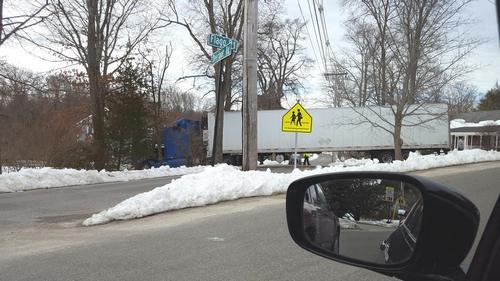 Above: The latest in multiple incidents of a truck drivers overestimating their ability to make turn right from Flagg onto Deerfoot Road. (image contributed)

Work on solutions to truck issues on two back roads between Route 9 & Main Street seems to be stalled. Meanwhile, at least one homeowner continues to feel the impact of inaction.

This morning, a truck driver trying to turn right from Flagg Road onto Deerfoot ended up in a homeowner’s front yard. It was an all too familiar sight. And one that the homeowner asked the Town to do something about last fall.

Homeowners on nearby Parkerville Road also asked the Town to help with their truck complaints. That request, rooted in noise complaints, has been looked into. But a recommendation made by one board more than a month ago has yet to be publicly followed up on.

On November 3rd, resident Thomas Joyce of 54 Deerfoot Road told the Board of Selectmen that there had been several incidents with trucks ending up in his yard and damaging trees. He asked the Town to look into the cause of the issue.

Joyce theorized the trucks were trying to get to Ken’s Foods somehow miss it, then navigation redirects them to take Flagg to Deerfoot to get back there. Public Works Director Galligan believed that a traffic study would help find answers.

The Public Works Superintendent told selectmen that the issue on Parkerville was based on noise complaints. On that road, garbage trucks were believed to be the culprits. The road has speed bumps which apparently aggravate the noise issue.

She said that residents were requesting a truck exclusion. She believed a traffic study was an important first step. Selectmen approved the request.

The study findings were submitted to Public Works in early January and discussed at a February 13th meeting of the Public Works Planning Board.

According to Southborough Wicked Local, the PWPB agreed to recommend a prohibiting heavy commercial vehicles from using Parkerville Road as a cut-through between Route 30 & Route 9. They did not support any similar actions for Deerfoot Road.

Both reports had come back with findings that exclusions were unwarranted under Mass DOT’s safety guidelines. Those guidelines apparently look for three criteria:

Reports relayed that not a single tractor trailer was observed on either road. (If that seems odd, it may be because both reports studied a single “typical” weekday. Parkerville on Thursday 11/16/16 and Deerfoot on Wednesday 11/22/16).

there are only a few residential homes on the roadway, therefore, an overnight exclusion would not currently be warranted or beneficial.

Despite the findings, the PWPB voted 3-0 to support pursuing the Parkerville Road exclusion. SWL reports that the decision was based on complaints of a resident about loud trucks waking him at night.

The recommendation calls for the Board of Selectmen make the Parkerville Road exclusion request of the Department of Transportation.

But the item has yet to appear on selectmen’s agendas, including their meeting scheduled for tonight. And as of this afternoon, Public Works Director Karen Galligan couldn’t say when it would be.

No reference is made in the Deerfoot Road report to the intersection issues at Flagg Road.

This morning, another tractor trailer driver attempted the impossible turn. Trying to turn right from Flagg Road onto Deerfoot, the driver ended up in the front yard across the street again.

I followed up with Police Chief Paulhus to find out if he had information on how many incidents there have been with trucks at that intersection. He responded that his computer pulled up two recent incidents, three in 2016, and another in 2015.

This wouldn’t include any incidents that weren’t called in.

Photos below of the latest accident were sent in by two readers. One reader pointed out that the mishap occurred this morning while area kids were walking to Trottier and Neary schools.

Not sure why we have to pay out more $$$ for a traffic study…just exclude all semis…they should not be allowed on those two roads anyway. Anyone can see how that is a disaster waiting to happen. I hardly ever travel on those two roads, but can imagine how unsettling it would be to meet up with one. As far as garbage trucks go, they come once a week for one trip down the road and that can’t be helped unless you want to make the residents in that area go to the transfer station themselves. I believe that could be a hardship or even impossible for some residents who live in that area.

Can we please stop wasting money on studies and start using some common sense?

Agree. This picture says it all. A trash truck can make that corner, a semi cannot. We don’t need a study. We have eyes. I live in this area and when I see one of these trucks or a Peter Pan size bus, I wonder how on earth they ended up there (Waze likely) and if they regret coming down these narrow streets.

Agree! No traffic study necessary. I encountered this very truck on its way down Flagg Rd. yesterday morning. The driver was driving too fast down the center of the road and I thought how ridiculous it was that such a vehicle was allowed on a dangerously narrow, winding road that is heavily utilized by pedestrians, including children walking to the Trottier/Neary complex. It’s even more ridiculous that he attempted to negotiate the turn onto Deerfoot. It’s quite obvious that it’s not possible. There are serious traffic safety issues in the Flagg/Lovers/Deerfoot area. I feel for the property owners affected by this but I fear that something much worse than property damage will happen some day. Is that what we’re waiting for?

How in the world did the PWPB agree to recommend prohibiting heavy commercial vehicles from using Parkerville Road as a cut-through, and not Deerfoot Road? Parkerville is a straightaway with sidewalks. Deerfoot is windy and has no sidewalks, and a fair number of pedestrians, including school kids.Big trucks like the one that wound up in the Joyce’s front yard shouldn’t be allowed on either road.

Would be great if Parkerville on the southside was included. Far too many semi’s make the illegal turn onto Middle Road or make a dangerous wide turn off of rt 9 into Parkerville to head south.
I’ve watched these trucks come down Parkerville and pull out onto Southville to head west with horns blaring from vehicles coming over the little hill next to the church. These truck go fast, don’t care about school zones or no truck routes and they are always safe in Westborough before a cruiser could ever get to the area..

I wouldn’t say a word about it if the roads they choose were safe or legal but they are neither and it’s only a matter of time before a westbound truck or school bus on Southville t-bones a truck coming off Parkerville.

And as for traffic studies…what happened to the one done on the Southville/Parkerville intersection? It was supposed to make Highland a one-way, add signage, fix poorly placed signs. Money wasted when all we need is common sense.