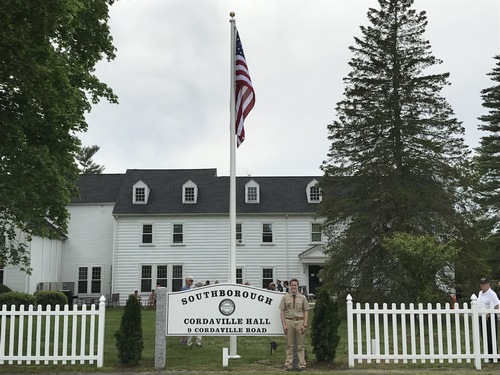 Above: Scout Devin McCarthy proudly stands by the flag he helped erect this spring. (contributed photo)

There’s a new flag flying high in Southborough this week.

Yesterday, the Southborough Senior Center hosted a ceremony to celebrate the first raising of its new US flag. The pole was installed last month as part of an Eagle Scout project.

Scout Devin McCarthy worked to raise money from businesses and individuals around the community. On April 8th, fellow Troop 92 Boy Scouts helped him to dig the 3 foot pole and set the “sleeve” in concrete. On April 30th, he worked with four other scouts to raise the 25 foot tall pole.

Yesterday afternoon, Boy Scouts, Town officials and several other guests gathered for the ceremony. Veterans raised the 5′ x 8′ flag to the music of “To the Color”. McCarthy followed up with a speech thanking people for their contributions to the effort.

Click thumbnails below to enlarge pictures from the ceremony:

Congratulations to McCarthy and the Senior Center.

Beautiful! Thanks to the young man who made it happen.

AND could be a good time to remember we have a town flag, designed by our former Cemetery Supt. Leo Pessini. How about having our town flag at Town House and Senior Center and ….? I’m sure there must be one of the flags somewhere. If design is needed, I think I could find one or even draw a picture… it’s a nice simple flag.
Anybody seen one lately?

Nice job, Devin and the Scouts!