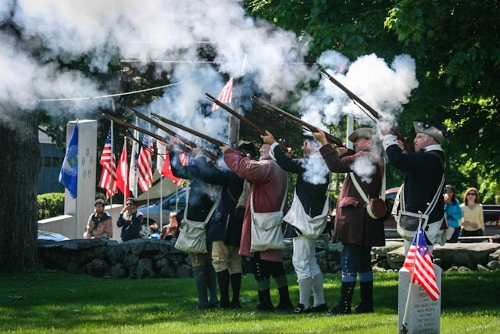 Above: Memorial Day observances honor soldiers’ sacrifices as far back as the revolutionary war. (Photo by Susan Fitzgerald)

A quick reminder – The Southborough community is invited to participate in tomorrow morning’s Memorial Day services.

Every year, veterans, local officials, and scouts march on Memorial Day. The morning begins with veterans invited to gather at the American Legion Headquarters (at the Community House). That gathering takes place at 8:15 am.

Participants for the 9:00 am parade should gather in advance in the Marlboro Savings Bank parking lot. Joining veterans as usual will be the Algonquin Regional High School Band, the Trottier Band, Boys Scouts, Cub Scouts, and Girl Scouts.

At 9:00 am, the parade proceeds down Main Street, then to the cemeteries and memorials:

Along the traditional route, we will [pay] our respects to those Veterans who have been laid to rest at the Rural Cemetery, Burnett Cemetery and Revolutionary War Cemetery.

At the Civil War Monument, we will honor those Soldiers of the GAR from Southborough who were killed.

We end our Observances at the All Wars Memorial with the traditional speakers, singers from Algonquin Regional High School and close the ceremony with the National Anthem.

Join us as we mark the 100th Anniversary of the United States entry into World War I – the War to end all Wars.

For a photo gallery of last year’s services click here.