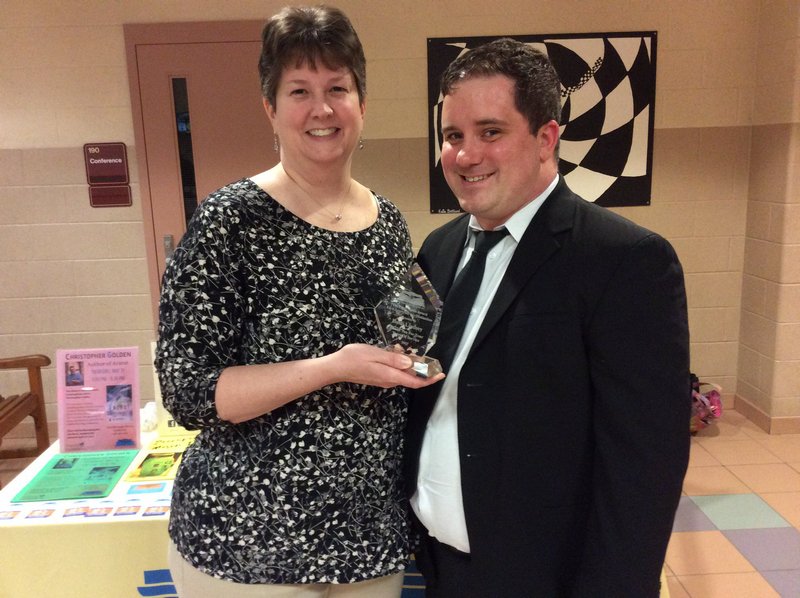 Above: Heidi Lindsey was recognized for her service to the library at the last Annual Town Meeting. Soon, she’ll be moving up the hill to work at Town Hall. (photo from twitter)

This month, the Town announced a congratulations to one employee that is bittersweet for some of the community. The Library’s Hiedi Lindsey was promoted to the Town House. Lindsey accepted the post of Assistant Town Accountant.

Next week, the Library is holding a special event next week to allow the public to say goodbye before Lindsey heads up the hill:

There will be a special reception for Heidi Lindsey on Tuesday, August 22 from 1:00-3:00 pm. Patrons are welcome to stop by the library to congratulate Heidi and offer wishes of good luck and share in some food & fun.

Lindsey is making the career change after working at the Library for the past 19 years. And some of you may remember that her face behind the desk far further back than that.

The Marlborough resident is a native of Southborough. Back in the 80s, Heidi Jones worked as a Library Page from 8th – 12th grades. In 1998, as an adult with young children, Lindsey returned to the Library part-time to work.

In 2004, Lindsey was able to take a full time position when her long-time friend and colleague Peggy Tuttle retired.

This past spring, Lindsey was honored at the Annual Town Meeting with the Peggy Tuttle Award for Library Service Distinction. Library Director Ryan Donovan announced the award, explaining:

During her 30+ years as a librarian, Peggy Tuttle always said that the people were the most important part of her job. Peggy played a huge part in establishing the welcoming attitude and creating the charm of our town’s library. Children’s Librarian, Kim Ivers, who knew Peggy Tuttle for the majority of her professional career, described Peggy Tuttle as “the embodiment of customer service.”

Many staff members tried to emulate Peggy after her departure, but one has consistently done so for nearly two decades of employment at the library. Very few have been as dedicated to helping Southborough residents as much as tonight’s award recipient. I am extremely proud to present this year’s Peggy Tuttle Award to staff member Heidi Lindsey.

Donovan didn’t get the chance to complete his speech.* He had intended to follow with:

Heidi routinely goes above and beyond for library patrons, which was reflected in the fact that she received multiple award nominations from members of the community.

Congratulations to Heidi on a promotion well deserved. I know I’m not the only one who will miss seeing you at the desk!

*Donovan told me that the applause from the crowd at the mention of Heidi’s name cut off his speech. And as people at the meeting will recall, there was a lot of business to take care of that night. So, once Lindsey accepted her award, voters were eager to move on to articles.

Congratulations Heidi! Good luck in your new endeavor. Peggy would be proud of you.

Glad you are staying in town, Heidi, but Library patrons will miss your face behind the desk. Best of luck!

Sorry that I couldn’t make it to your going away party. Best of luck in your new job, but I will really miss you at the library. You were always friendly, helpful, and gave great recommendations!!