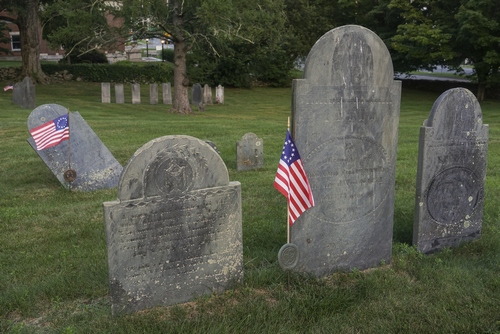 Above: The Historical Commission is has announced efforts to preserve Old Burial Ground headstones, which not only recorded Southborough History, but are considered folk art that “reflects the tastes, beliefs, and the lives of the residents of the Southborough over its first century and a half.” (photo by Kate Matison)

According to the Southborough Historical Commission, Southborough is in danger of losing an important part of its history. A grant sought through the Community Preservation Act seeks to fix that.

The Old Burial Ground served the community in the 18th and 19th centuries. Subsequently damaged by a major hurricane* and neglected over time, the cemetery has fallen into disrepair.

Public Works had been planning to do some preservation work if funds became available. Southborough Historical is hoping that this year’s round of CPA grant funding will be the time.

This summer, using past CPA funding, the commission paid for a survey of the grounds with an assessment and conservation plan. Their expert identified gravestones at risk and made recommendations. The two step plan calls for 63 headstones to be repaired, straightened and cleaned in the first year. Another 26 would be handled the second year. The estimated cost is $23,000.

Applications for the next round of CPA funding is due September 1st. This fall, the Community Preservation Committee will review applications, hear presentations, and vote on which project(s) to support as Warrant Articles for the Annual Town Meeting in April.

In preparation, Historical is beginning to seek public support for the initiative. The commission reached out to me to inform readers about the project and the history it seeks to preserve.

Below are a few photos from the Old Burial Ground (click to enlarge) followed by more details (and links) shared by the commission:

In June 2017, the Southborough Historical Commission hired Kai Nalenze, principal at Gravestone Services of New England to survey the of the Old Burial Ground (1734-1845) and write a Conservation Master Plan/Conditions Assessment. Gravestone Services is a well-regarded company that cleans, conserves and repairs historic gravestones and monuments throughout New England. The Community Preservation Committee (CPC), spearheaded by the Chairman Freddie Gillespie, has funded the Master Plan/ Conditions Assessment.

Over time, the Burial Ground has been neglected, and still bears some scars from the 1938 hurricane. If it is not conserved soon the Town will be in danger of losing an important part of its history. For some time DPW’s Karen Galligan has been planning to do preservation work at the Burial Ground if funds became available. Now it looks as if the face-lift will begin.

According to the Masterplan, the estimated cost to repair will be $23,000. The Historical Commission will apply for CPC funding In September 2017, to complete the recommendations in the Masterplan.

Located at Common and St. Marks Streets, the 1.7-acre Old Burial Ground was documented as part of the Southborough Historic Resources Survey conducted in 2000, which is recorded on the Mass. Historical Commission’s MACRIS database

The founding of Southborough’s Old Burial Ground was one of the first acts undertaken by the citizens of the Town soon after 1727, when Southborough was incorporated. The last burial occurred in 1895.

Who is Interred in the Burial Ground?

The Survey records that significant graves abound. Reading the headstones reveals the stories of many Southborough citizens interred here. Evidently, life was harsh for many families. Large numbers of children lie here, as well young wives whose death dates suggest they likely died in childbirth. The ravages caused by diseases are recorded. The Parker family plot includes three daughters, Nancy, Maria and Eliza Ann, aged between 18 and 27, who died of consumption (TB). In the Fay family plot, “Ma jigger” was buried in 1828, the last Native American to be interred on the site of the former Indian burial ground. Also buried here, Southborough’s first pastor Nathan Stone, and its third, Jeroboam Parker who served 50 and 53 years respectively. Marked graves show several early settlers, including John Wood (1730) lie here as well as graves marked ‘veteran.”

Old Burial Ground is a valuable source of folk art that “reflects the tastes, beliefs, and the lives of the residents of the Southborough over its first century and a half. Powerful yet changing religious beliefs are evident in the abstract symbols of the earliest stones, in the angels and death’s heads of the later eighteenth century, and in the sentimentality and the cult of mourning epitomized by the urn-and-willow stones of the first half of the nineteenth century.” (SBR.801)

*The National Weather Service describes: The Great New England Hurricane of 1938 was one of the most destructive and powerful storms ever to strike Southern New England. ” The Blue Hill Observatory (about 25 miles from Southborough) clocked 121 mph sustained winds and peak gusts of 186 mph.

lets hope the town gets the funding, I think it will be money well spent, Glad someone is keeping an eye on the condition of the head stones, enough CPC monies have been spent on the X apple orchard , It’s time to fix other areas around town.

sorry for the typo, should read CPA monies

I think it would be money well spent…it will get my vote! So much history there and although there is no one alive who knew any of these people, we should give them and their final resting place the respect they deserve.