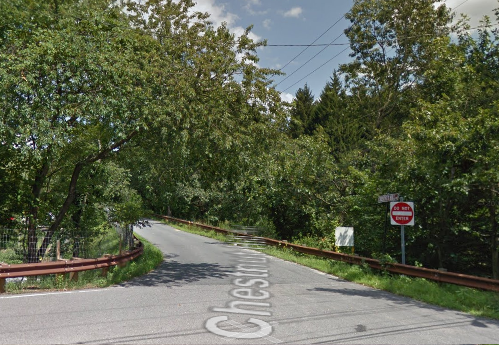 Above: According to a Chestnut Hill Road resident, drivers already take this wrong direction illegally. A future hearing vote could make the move legal for a 1,000 foot stretch. (image from Google Maps)

Last night, the Board of Selectmen heard a proposal to convert the north section of Chestnut Hill to a two-way street. The only official decision was support for holding a future public hearing to decide.

Public Works Superintendent Karen Galligan explained that converting the road and rules there would require a public hearing. Last night’s discussion was just to gauge the board’s “appetite” before putting in the necessary work to pursue a plan.

As I posted last week, the issue revolved around a new 12 home subdivision (Chestnut Meadow) that is in the planning stages. The Planning Board was concerned that heavy construction trucks, likely in and out over four years, would put too big a strain on the one way road. Looking at the road, Public Works agreed.*

The cost of changing the final 1,000 foot stretch into a two way would be picked up by Chestnut Meadow developers. But Selectman Brian Shea worried that future residents of the development would lobby for the entire road to become two way. He wouldn’t want that to happen on the Town’s dime.

Galligan said changing the narrow middle section would be a major undertaking, especially due to drainage swales along the road. And she believed it would have pushback from both ends of the street since it would change the nature of the road. But she agreed it was a possibility.

Selectwoman Bonnie Phaneuf wondered if they could condition a prohibition on future residents petitioning for the change. Town Administrator Mark Purple said they could, but that a future board would be able to overturn it. Still, Galligan noted that a condition could clarify the board’s intent for anyone who looked in the future.

Whitney Beals gave the board his perspective as an abutter. He told them he lived on the road as a child and returned as an adult, living there for the past 27 years. Beals recalled that the road was a two-way for the full route when he was a child, before “saner minds prevailed”.

Beals told selectmen he might support the proposed change, agreeing that the middle of the road wouldn’t hold up under construction trucks.

But he cautioned that the road already has issues with drivers ignoring signs and rules: trucks, wrong way drivers, and speeders.

A truck prohibition is regularly ignored by oversized, despite his flagging down drivers to inform them**.

He also frequently stops and redirects drivers going the wrong way on the one-way section. He said they claim their phones are telling them to take that route, and don’t notice the Do Not Enter sign. And high school students “bomb through” the back road. (It’s a popular shortcut to Algonquin.)

*A temporary two way for trucks only was considered as the solution. But Public Works and the safety chiefs worried that it would lead to dangerous confusion, with drivers illegally taking the wrong way in the future. They advised that a solution should be permanent. Fire Chief Mauro also preferred the access for emergency personnel to the future subdivision, in cases where they are proceeding from a location closer to the north end of the road.

**Beals said that repeat offenders of the truck prohibition are Jordan’s Furniture and an unmarked white delivery van. Chair Dan Kolenda said he would try reaching out to Jordan’s.

Habitech Homes. You can read more in a post I previously wrote related to that development: https://mysouthborough.com/2017/07/19/chestnut-meadows-highlights-southboroughs-continued-work-on-and-struggle-with-open-space-issues/