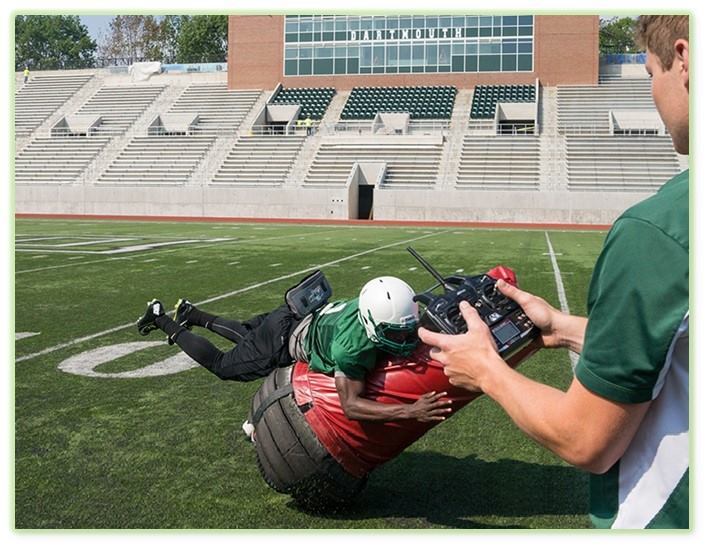 Above: Starting this week, ARHS is using this technology to take player-on-player impact out of varsity tackling practice. (image from MVP Facebook page)

Why is that newsworthy? Because, their MVP is isn’t human.

The Mobile Virtual Player is a robotic tackle dummy. (Scroll down for video of it and players in action.) Algonquin is making headlines as the first high school team to integrate it into its practice regime.

Originally developed by Dartmouth College grad students, the 150-pound MVP can travel up to 20 miles per hour, handle significant impact, and move in any direction via remote control. . .

Incorporated by collegiate and professional football teams over the past year, the MVP came to Algonquin thanks to a Northborough parent, who worked on the development of its’ engine and suggested his daughter’s school as grounds for beta testing.

The story’s main focus is the reduced risk of concussions for the varsity players:

At an average cost of $8,000 it is not yet widely affordable for high school teams, but this adaptable dummy is extremely valuable due to its ability to simulate live tackling without subjecting players to the dangers of concussions during practice.

“Whenever you can eliminate player-to-player impact that’s something we want to jump on,” said Algonquin first-year head coach Taylor Allen.

Nationwide enrollment in youth football programs has decreased over the past few years and that can in turn effect high school programs, so coaches are hopeful that utilizing this new technology can make football a safer sport to play.

“But every year there’s better helmet technology, new tackling techniques and now [the MVP], which can allow you to get the work in that you need without as much contact.” . . .

[Algonquin senior captain running back John Polymeros said,] “As an offensive player it’s great to limit the hits I’d be taking in practice and let the defense hit [the MVP] so I can stay fresh for games.”

The story also indicates that fast moving MVP, controlled remotely by coaches, is a wily opponent to practice again. And I’m sure the team hopes improved practices will help them turn around their losing season. More importantly, its great to hear any breakthroughs that improve player safety.

For the Globe’s full story click here. And to see video of the MVP in action, click on the tweet below (or check out the story, which has additional video):