Above: MCAS results are out and 3rd – 8th graders performed better than stats appear at a glance (images from Mass DOE results site)

The state has released MCAS results from the spring 2017 tests. While some stats may look worse than past years, Southborough students actually performed impressively compared to other districts.

Judging by Mass Dept of Ed’s press release, many parents may assume at a glance that their child has regressed when he/she hasn’t. That’s because it is the first time the “Next Generation” test was given. The new test was for grades 3-8 in Math and English Language Arts.

In general, the new standards for Meeting Expectations are more rigorous than the standards for reaching the Proficient level on the legacy MCAS.

Spring 2017 is a baseline year for a new test in grades 3-8, and spring 2017 scores [for Math and ELA] should not be compared to previous years’ scores.

Southborough ranked #2 for the average Math scores out of 358 school districts for grades 3-8. We beat out Hopkinton (8th place), AMSA (14th place), and far out ranked Shrewsbury and Northborough.**

Southborough’s scores for ELA don’t look impressive on their own. But we fared well in the rankings, just missing the top 5%.

In ELA, we ranked #20. We were 3rd place out of neighboring districts, coming in after Hopkinton and AMSA.**

Science rankings get a bit more confusing. Since these were MCAS “Legacy” tests, high schools were included in rankings. With differing district splits, it’s cleaner to look at the grades individually. Plus, the score information was analyzed differently.

Studying the data for grades 3-8 took too much time today. So, I’ll have to table looking at Algonquin until later this week.

Below are some more comparison stats and details on our Grades 3-8 results: 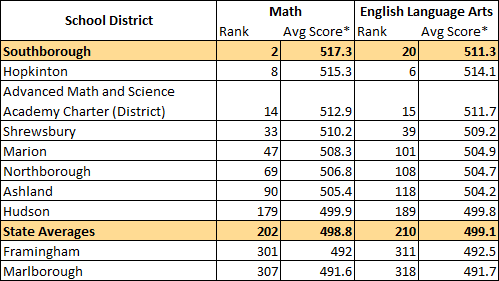 Click images below to enlarge the detailed results by subject and grade:

The approximately 50 percent of grades 3-8 students who are already scoring in the Meeting or Exceeding Expectations categories is not the result of a grading curve; it is where the scores fell after educators set the standards. The educators valued both readiness for the next grade level and consistent expectations across grades.

A higher percentage of students are likely to score Meeting Expectations or above in future years as students and schools become more familiar with the tests’ expectations.

Updated (10/23/17 5:23 pm): I mistakenly left a draft item in the headline. I had written that ARHS is ranked #3 for science. But that was based on rankings that split out our 1oth graders as a separate district from Southborough students and averaged other towns 5th-10th graders as single districts. (Not really a level playing field.) I haven’t yet had a chance to take a better look at where our 10th graders rank vs other 10th graders in the state.

Congrats and thank you to the teachers and supporting teams that have done such a great job! The kids certainly deserve some praise too!

Thanks of the information. Our schools are amazing. Do you know when can we expect the results of our own child’s MCAS test to be given to us?

Another stat worth noting is that when you sort by school Woodward is number one in the state for math, and it’s by a lot. (number four for ela). Not really a fair comparison considering the way our schools are structured but number one is number one!

It isn’t a fair comparison. But it is fair to rank by specific grades. Turns out that Woodward still comes out tops that way!

Southborough is #1 in math by district in both 3rd and 4th grade if ranking by Avg Score specific grades.

Hey there, Betsy,
We can anticipate receiving them soon — late Oct/early November. (By the way, the 4th grade class did #1 in Math, compared to all the 4th graders who took the same test. I filtered on the scores for 4th graders….) (-:
–Diane Romm