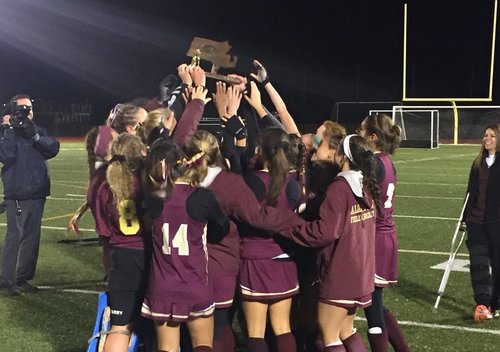 Algonquin athletes continue to soar in the fall post-season. Another team is headed to state playoffs and two more just need one more win to make it. One of those key matches plays out tonight.

The girls will play in the State Semi-Finals next Tuesday, November 14th. They’ll be up against Western Mass champs, Longmeadow. Longmeadow entered the tourney with no losses vs Algonquin’s 3. (But so did Nashoba.)

Boys Soccer defeated lower seed Saint John’s in the district Semi-Finals 1-0. (You can read about it in the Telegram.) The Boys get to move on to the Finals 5:00 pm today at Nashoba. They’ll be facing upper seed Marlborough. The teams faced off twice this season resulting in one loss for Algonquin followed by a tie.

Now the girls have to overtake top seed, undefeated Wachusetts in the Finals. The last time one of the teams made it to States was in 2015 after then-top seed Algonquin beat Wachusetts in the district finals. More recently, the Mountaineers beat the T-Hawks once this fall, followed by a tie.

The schedule is now out for the Regional Cheerleading tournament. T-Hawks will compete at 9:30 am on Sunday at Shepherd Hill RHS.

As I’ve previously posted, Cross Country teams are running in the CMass finals tomorrow at the Gardner Municipal Golf Course. The Boys will run at 11:40 am and Girls at 1:00 pm.