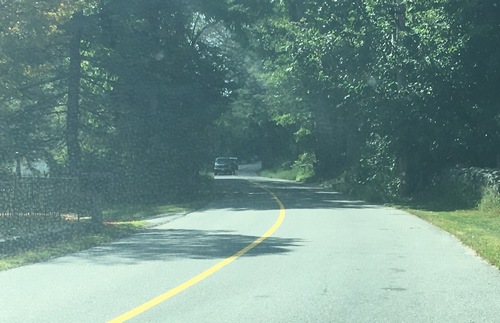 Above: A controversial yellow line painted this fall was one of the topics discussed at an update on Flagg Road safety held at last week’s Board of Selectmen meeting. (photo by Beth Melo)

This fall, selectmen received complaints about a yellow stripe that suddenly appeared on the road. And they got more calls when residents saw cement footings and poles being installed along the way.

Last Wednesday night, Galligan agreed to avoid future surprises by notifying residents in advance of any new work being done.

Public Works is also following through on plans to reconstruct the road’s intersection with Deerfoot. With help from MassDOT that should be done in 2018. And they are still considering installing safety humps as an additional measure.

In the presentation, Galligan reiterated that Flagg Road isn’t the only street they hear about as a safety issue. Among recommendations from Galligan’s report:

Abundance of cul-de-sacs leads to through streets in Town carrying high traffic volumes. . . Residents from many other through streets are looking for traffic calming. . . Safety Studies should be performed on many of the through streets. Then the report’s recommended actions should be evaluated by the Town Those actions that can be easily executed should be taken as soon as practicable

Following the update, a few residents addressing the board continued to express dismay over the yellow line and make suggestions for other improvements.

Bantry Road resident Majid Yazdani asked about areas of the road where Flagg’s stripe is closer to one side than another. He worried about the danger that causes. Galligan explained that the lines are painted by trucks which sometimes have to swerve. But she promised she would look at whether there was a safety issue that needs to be fixed.

Flagg Road resident Gloria Linden said she was pleased with driver feedback signs and can’t wait for them all to be done. But she believed the stripe highlights the fact that there is no room for pedestrians as cars hug the sides of the road.

Linden posited it gives drivers a false sense of security while making it more dangerous around curves. She said that it frightens her as a parent of kids who walk and cycle to school on the road every day.

Resident Felix Wamburu went further, stating that drivers seem to feel obligated to stay within their painted lane even when they see people running on the side of the road. He said the area around Lovers Lane is the place he would see a speed hump as most useful.

Linden said she opposed residents’ past talk of dead ending the street before Park Central*. But she wondered if making the road one way would improve it.

The one way idea was touched on by two more residents that followed.

Lincoln Merrihew, also of Flagg, echoed safety concerns around drivers hugging the as they come around blind corners. Merrihew said that he might support making the road one way after Blackthorne Drive. It would give much of the road the convenience of two way, but stop Park Central drivers from heading down the Route 30 end of the road.

Keturah Martin from Deerfoot Road reminded the board to keep other roads in mind when they seek to divert drivers from Flagg. She said that before implementing measures to move drivers off of one road, they should study the effect on other area roads.

She also reminded selectmen of a presentation she participated in at a past meeting. Martin said that following a public meeting hosted by the board on Flagg Road, she was a part of small group that met to work through some issues.

Martin said that the group had recommended a series of one way roads to improve safety in the area:

we came up with this preliminary idea of how this might look. . . that’s one area that keeps being floated that I think is worth looking at more in more detail, if the traffic were to increase, especially.

Karen Shimkus of Lovers Lane complained about the aesthetics of the painted stripe down the “state protected scenic country road”. And she questioned the safety of an intersection forcing trucks to turn left onto Deerfoot where 18 wheelers have gotten stuck on a school crossing.

Galligan explained that trucks got stuck when trying to make a right turn back towards Route 9. The new intersection would keep truck drivers from trying and force them towards Route 30, then Route 85 to get back to Route 9.

*Park Central plans are for 180 condos and 140 townhouses. The Zoning Board of Appeals approved the development with all residential access to be via Flagg Road. The Board of Selectmen has lobbied the state to try to get access via Route 9 and is looking at egress options. The development is still going through appeals and the final site plan has not been approved by the Planning Board. (Click here for past coverage of that project.)

People don’t want/think about safety – even when all the warning signs are there – until something happens to them. Change prompts the need for action.

The still unanswered questions are…. WHY are actions still being taken unilaterally ?… and …. HOW does DPW get authorization to proceed on ANY “improvement” or change without FIRST asking for local INPUT and then gaining clear CONSENT ? …. This should always be done BEFORE taking actions, which are otherwise entirely unilateral, and may in fact be harmful and undesirable in the opinion of many abutters.

Don’t you know, this isn’t our town, it’s our elected officials’ town. We voted them in so clearly their opinions are the only ones that matter.

I’m fine with it. That road is a MAJOR safety issue… the small town politics in this town are huge impediments to progress. Which is a good thing for some things… not so good when we need action take because of safety reasons. I applaud the town for taking action and I applaud the elected officials for having the common sense to act when it is obvious to do so. What are you going to do, wait for some person to get hurt or killed? Something needed to be done and it needed to be done immediately.

I would like to see it done well, however, not lopsided. Many of the recent lines in town seem to go well out of their desired locations – on Cordaville Rd./85 by the cemetery and on Boston Rd./30 before 30 turns onto Main St., for example.

Agreed. It baffles me how you can screw up a line down the middle of the road to such a degree. How does that happen???

Good luck with the speed tables and the driver feedback speed limit signs!

There are ‘speed tables’ installed on Parkerville Road (north). Unfortunately, they seem to have little to no effect on vehicular velocity. In the morning and evening rush hours cars typically whizz by at 15 – 20+ MPH in excess of the posted speed limit. This traffic includes: parents taking their kids to/from Neary & Trottier schools and commuter cut-through ‘artists’, attempting to gain position on route 9 by diverting to route 30, then rejoining route 9 in Westborough.

As for the driver feedback signs, I regularly see cars on Middle Road, where feedback signs were installed in the summer of 2017, going 10 – 20 MPH over the posted limit. Note those signs show the speed limit AND flash the vehicle’s speed.

The sign’s effect on the vehicle’s operator and vehicle speed? Close to none.