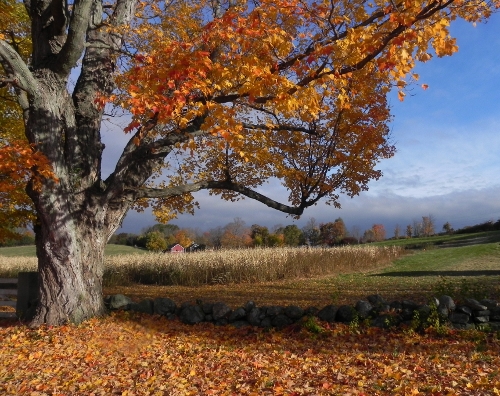 Above: Foliage is pretty drab right now, especially in this dreary weather. So, I’m reaching to a past fall for a colorful pick me up. (photo by Sarah Cassell)

It’s time for another open thread. What’s on your mind this week, Southborough?

For those of you new to the blog, the open discussion thread is your place to ask questions, sound off on town issues, or share information with other readers. Here are some suggestions to get you started:

Is someone going to fix the reservoir American flag? We need another stealth operation to get it fixed. It barely lasted a month this year.

In anticipation of the upcoming winter season, I’d like to thank the DPW in advance for all they do to keep our roads clear. They catch a lot of flak for stuff they do around town, but I, for one, would like to express my gratitude for all they do to maintain our roadways in a sincere effort to improve the safety of all. Thank you, and best of luck for a mild winter!

Anyone know the origin of Mauro’s cafe being known as “the spa”? I remember the nickname from when I was a kid, but never knew the origin. I knew it predates by at least two owners.

It came up in a conversation with my daughter when we saw it posted on a sign for the pie sale held of there last weekend. I suggested that maybe a reader would know.

0
Ghosts of Main Street Past
Reply to  Beth Melo

It certainly is not “the spa”. The new chef is serving up new good eats (don’t get me wrong) but the place is a garbage heap. The tow place, Mauro’s, the dry cleaner, the barber, Cardboard House of Pizza, and the tainted lot all need to go. The whole area needs to be carefully developed with new families and the future of Sboro in mind. The liquor store can stay now that Dave Perry made it look presentable.

0
Author
Beth Melo
Reply to  Ghosts of Main Street Past

Beyond harsh. And I have to object to the concept that the entire downtown area should cater solely to “new families”. While it would be nice to see some businesses there that do, the idea that the “ghosts” and generations of families that have had businesses should pack up to make way for new seems pretty insensitive.

0
D. McGee
Reply to  Ghosts of Main Street Past

So glad you approve of at least the liquor store. I would suggest you plunk your own “new family” money down and purchase all of the remaining sites and “carefully develop” them more to your liking. Perhaps then you might gain a better appreciation for running a small business in a small town.

0
louise barron
Reply to  Ghosts of Main Street Past

Let’s visit your home and determine if it qualifies as a “garbage heap”.

A reminder that residents who are interested in improving the Downtown (no matter what your vision is!) should join the Economic Development Committee’s public forum on this topic on Thursday, November 30th at 7:00 at the Townhouse.

No thanks on EDC. The downtown is just fine. Thank you very much

This link does a fairly good job of describing spas, which are uniquely Massachusetts (like jimmies, bubblers, blinkers, etc.):

Another Environmental Issue you need to know about – “U.N. Geoengineering Program”

The two BIG issues of our day that will most definitely affect us, certainly our children and grandchildren are
I. the 5G (fifth generation) wireless radiation and its relationship to transmitting towers every quarter mile or so, and the “Internet of Things” (IoT) … google this vision of future., and

II. Geoengineering (an high tech, seemingly innocuous term that relies primarily on spraying metals into the troposphere to “reflect sunlight” to prevent warming.)

Let’s talk about Geoengineering today. I ask everyone not familiar to look into it, see if you are ‘OK’ with daily spraying of aluminimum oxide, barium and strontium metals into the upper atmosphere.

Jet engines burn fuel, primarily kerosene. The chemical byproduct is water vapor that crystallizes to ice at high altitudes, hence we see cloud lines or ‘condensation trails … “contrails”. The U.N. report on geoengineering says that ” ….contrail ice crystals evaporate on time scales of seconds to minutes. Short-lived contrails may also form without ambient water vapor if ambient temperatures are sufficiently low. ” THIS IS NOT WHAT I AM TALKING ABOUT.

Also trace elements of metal are naturally emitted in ‘contrails’ but at the ‘parts per billion’ level. Dont confuse trace elements with metal mixtures intentionally held in 55 gallon barrels and spewed into the atmosphere. see http://contrailscience.com/skitch/1549782-20120720-174527.jpg Why? This is intentional toxic release and the EPA and US Govt does this. Damn!

At least two or three planes I see every day emit a white plume of clouds that are NOT contrails, but rather chemical mixture being intentionally sprayed into the atmosphere. You and your children are breathing that stuff in RIGHT NOW… go ahead, take another breath! Many people argue as to what the purpose of this widespread spraying program is and has been for a long time, but i am more interested immediately in how it impacts health. Scientists report that heightened spraying is related to the 90% drop in bee population and rise in ADHD and Alzheimer’s Disease. I am still learning about these repercussions so i cant say if there is a causal relationship. But what i DO KNOW is its freaking crazy to be spraying TONS nanoparticle-sized aluminum, barium, and strontium into the atmosphere and think its a good idea with

” … In addition to strict carbon controls, it would be wise to simultaneously engage in controlled geoengineering experiments to explore the potential for short-term gains. Scientists need to consider the environmental risks of geoengineering, however, and the public and decision makers need to participate in discussions about the ethical, social, and geopolitical constraints of these new technologies (Williamson 2011).” BS. If a risk/benefit assessment were considered important, the Govt would have brought this matter to the forefront decades ago for discussion.
http://www.ipcc.ch/ipccreports/sres/aviation/index.php?idp=35

Anyway, I’ve vented but dont feel any better, but a least some are now aware and others may have learned more. What I dont really know is what to do now? we need to raise awareness first and decide how to act.. Ideas?

Perhaps you should live in a protected environment.

You know what I find very concerning lately? The fact the town thinks it’s ok the allocated hundreds of thousands of dollars from the Public Safety Complex to be used for the golf course. That is not what I voted on at the special town meeting. I watched last nights BOS meeting and was very disturbed by John Rooneys comments. I understand that he believes that the combined efforts of the Golfers, Conservation, and Open space help the Safety Comples pass, but the truth is no where in that literature did it say anything about spending it on the golf course. It is NOT ok to be taking away money from a building that will house the safety services of this town and put it towards a golf course that has yet to provide the community with a business plan! How can we dump thounds, apparently millions, into a golf course with absolutely no proof of being capable of making profit? I’m all for preserving the remaining land, but not in the form of a golf course that is ultimately going to cost the taxpayers every year.

This golf course was suppose to be second in line only to the safety complex. That’s not the case right now. They Golf Course committee demands the safety complex bend over backwards, spends their money, on a questionable business. It’s appauling that we are focusing on a recreational sport rather than supplying our emergency services with the appropriate facility. Priorities are all wrong.

It was a long discussion with back and forth comments last night. It’s one of the many items in Town Government I haven’t had a chance to cover yet. (I haven’t even had a chance to finish watching the full discussion.) So, anyone who wants to know what Townie is referring to can check out the presentation and discussion from last night’s Board of Selectmen meeting here: https://www.youtube.com/watch?v=56CfSe3wBcY&feature=youtu.be&t=250

I had a feeling you would be on it.

Do you think a $40 million police and fire complex for 10, 000 people is OK. It’s disgraceful. This sum of money should make everyone in this town sick.

Not quite sure where $40 million came from, but your history proves you’re very good at over exaggerating, everything.

I’d rather spend money on emergency services that everyone has access to rather than a golf course only a small handful use.

Forget the golf course, save some money. Let Mother Nature take back the land.

Can anyone recommend a good hairdresser? I’m looking for someone who can really give a great cut.