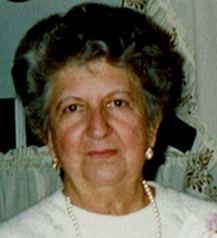 Josephine (Zarba) Laptewicz, 93, of Southborough, died peacefully on Wednesday, November 29, 2017. She was born into a large and loving Italian family, the third of six children. Her parents were Salvatore and Carmela (Ferro) Zarba. She graduated from Marlborough High School and then from the Boston School of Dental Nursing in 1945. Upon graduation she went to work as a dental assistant to Dr. Francis Paglia, then Dr. Robert Paglia, whose practice was in Marlborough. She met her husband, Walter Laptewicz, at a dance after WWII had ended, and they were married in 1947. In 1950 they moved to the bucolic delights of Southborough, where they raised 5 children, and where she spent the next 60+ years of her life.

Josephine was a loving, family oriented, hard working woman with an infectious outgoing personality. While raising her growing family she also tended her flower gardens, and helped Walter with his large vegetable garden. Josephine was an active member of the Southborough Catholic Women’s Club, and the Southborough Senior Center in later years. When her family was grown she “retired” from dental assisting and went to work at Data General, now EMC.

Besides her family responsibilities, Josephine was a prolific and talented craftswoman. Her skills ranged from crocheting, knitting, and sewing to painting and pottery. She enjoyed making things with her Knit Wits group. Her flower gardens were luxuriant. Family members cherish their handmade afghans made by “Nonna”. And her pantry was full with enough home canned goods to last for years. She and Walter loved taking their family to the beach, enjoyed large outdoor family gatherings and picnics, and played cards or went out dancing with family and friends, especially to polkas. Walter predeceased Josephine in 1994, and in her last years Josephine resided at Beaumont in Westborough, which became a “second home” where she received wonderful care.

Josephine’s wake will be held on Tuesday, December 5, from 4 to 7PM at the Morris Funeral Home, 40 Main Street, Southborough.

A Mass of Christian burial will be held on Wednesday, December 6 at 10:30 AM at St. Anne Church, 20 Boston Rd, Southborough. Burial will follow in the Southborough Rural Cemetery.
In lieu of flowers, memorial contributions may be made in her memory to Salmon VNA & Hospice, Attention: Hospice, 37 Birch Street, Milford MA 01757.

To leave words of condolence to the family, please visit Morrisfuneralparlor.com.