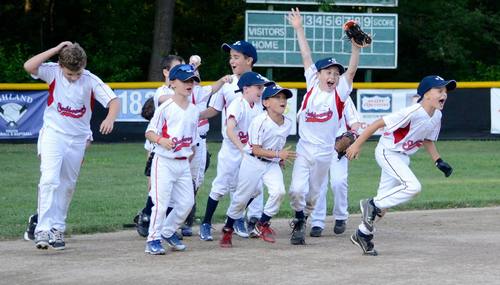 Above: Want to explain what working towards success feels like? A picture’s worth a thousand words. Experiencing it themselves is worth more. (image cropped from Facebook photo of 8 year old team winning the Ashland Sparkler tournament in 2015)

We’re hardly a stone’s throw from spring sports. But leagues require advance planning. So it’s that time when the leagues start recruiting.

Southborough Little League is reaching out to let people know that registration is open for spring youth baseball and T-ball.

This spring, the league is required to follow new rules on “baseball age”:

This new age determination will be a learning experience for all Little Leagues, including Southborough. As we understand the importance of playing with friends, we will attempt to allow for children to play with his/her grade if skill level permits and the decision is in the best interest of your child and other children in the program. With the new age implementation, we hope that Little League has finally gotten it right. If you have questions as you go through the registration process, please email: info@southboroughlittleleague.org

Here’s more information on the divisions:

Tee-Ball (Baseball Ages 4 & 5) – combination practice/game for approximately 90 minutes on Saturdays and/or Sundays starting May 4th and ending mid-June. We anticipate having 8-10 sessions per team, with each typically starting between noon and 3pm.

“A” League (Baseball Ages 6 & 7) – coaches pitch and no official outs and/or scores are recorded. On average, expect two or three sessions (games or practices) per week. Midweek sessions typically start at 5:30pm with varying times on weekends except for Sunday morning blackouts. Games are generally wed and fri and practice is Saturday at 1-2:30 to avoid soccer games.

“AAA” League (Baseball Age 10 & 11 with potential 9yo tryouts) – full kid pitching for entire six inning games. On average, expect three sessions (games or practices) per week. We currently anticipate each AAA team playing 4-6 games versus Northborough AAA teams, with half of those being played in Northborough and half in Southborough.

“Major” League (Baseball Age 10-12, with 10/11 year olds selected via tryout process in Feb) – full kid pitching for entire game. All 12 year olds, as well as 11 year old 6th graders, are automatically placed in the Majors. On average, expect at least three sessions (games or practices) per week. We currently anticipate each Major league team playing 4-6 games versus Northborough Major league teams, with half of those being played in Northborough and half in Southborough.