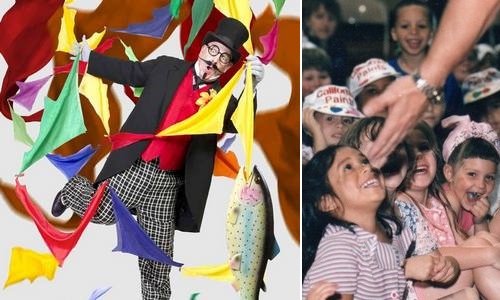 Above: The “accidentally funny magician”, Mr. Magichead, will bring his act to the Library a week from today. (images cropped from Facebook)

Next week, the Southborough Library will entertain kids on school break. On Thursday, December 29th, Mr. Magichead will visit to amaze and amuse.

Hilarious, high-energy kid’s entertainer The Stupendous Mr. Magichead, also known as John Sullivan, a Massachusetts-based professional magician since 1983 – performing exclusively for children since 1997, has earned his living for over 30 years traveling and performing funny magic!

With a wild & wacky magic show narrowly aimed at ages 4-9 combining physical comedy, and quickly-paced fresh original trickery, this children’s magician continues to travel near and far bringing laughter and amazement at hundreds of shows a year to kids of all ages at schools, birthday parties and family events.

The show will take place in the main, upper level of the Library at 3:00 pm. It’s free and open to the public with no registration required.

Here’s another picture of the entertainer amazing kids.