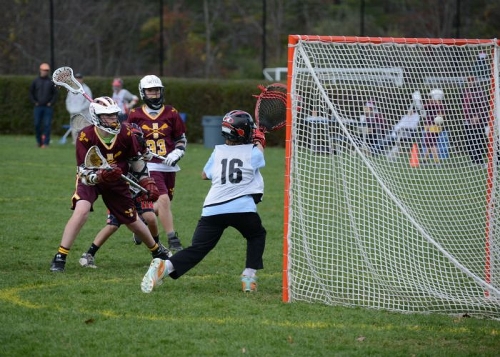 Above: Supporters of youth Lacrosse and other Town recreation pushed to save the turf field in Town. It looks like their work will finally pay off. (Photo posted to NSYLA website by Ric Carrera)

After news of closing, a reprieve, two Town Meeting votes, a special act by the state legislature, a lot of work by Town officials and residents, plus two rounds of bids – it looks like the work to re-turf 911 field will finally begin this year. But, it’s going to cost more than previously expected.

Southborough Wicked Local covered the vote at last month’s Board of Selectmen meeting. According to the article, it seems Recreation hopes that work can be done in time to use this spring.

Of course, this type of work is always subject to delays by nature’s interference. Between the Town’s track record with project timelines, and the fact that it’s New England, I’m personally doubtful they’ll meet the goal.

But, let’s focus on the good news that it’s happening at all. Earlier this fall, there was reason to fear that the whole project might be doomed.

Here are more details from SWL:

After being stalled for three years, the work to replace the artificial turf at the 9/11 Memorial Field is underway with hopes of being ready to open in time for spring sports. But the project will require an extra $140,000.

The money will come from the 9/11 Memorial Field revolving account, which can only be used for the field. Town Meeting approved $600,000 for the project in 2014, according to Public Works Superintendent Karen Galligan.

Galligan [in mid-December] asked selectmen and the financial Advisory Committee to use the money.

“The DPW bid the project twice this fall,” Galligan wrote in a memo to selectmen. “The first bid was not awarded due to lack of funding. The low bid from the most recent bid opening is within the available budget of the article and the revolving fund account.”

The lowest bid came in from R.A.D. Corp. of Rockland for about $689,000. Selectmen approved the bid last week.

The revolving account will eventually pay down the debt for the project, Galligan said.

Both committees approved the use of money, but not after the Advisory Committee was asked to reconsider after not gaining support at first.