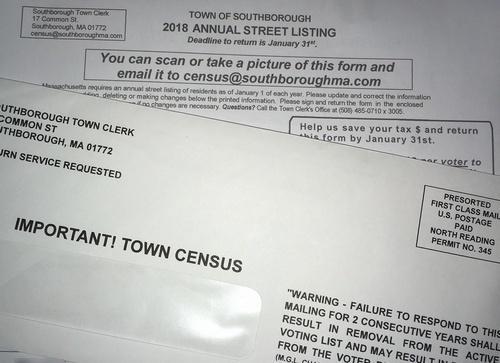 Above: It literally took me two minutes to update my census, snap a pic, and email it to the Town Clerk this morning. Of course, it wasn’t this pic. (photo by Beth Melo)

The annual Street Listing form was mailed out this month. (It’s also known as the Town Census) This is your reminder to fill it out and send it in.

The town is required by law to update its street listing of residents each year. All that’s required by you is to review the information, make any necessary corrections, sign, and return it to the Southborough Town Clerk’s office. (Sign and return the form even if no corrections are required.)

Town Clerk Jim Hegarty points out that ignoring their first mailing leads to additional costs to taxpayers. To make it easier, last year he began inviting residents to file it electronically. Options included scanning or taking a photo of it with your phone and emailing it in. Of course, snail mail is still also allowed.

We’ve had a great response to the census so far including over 500 people who saved the postage and returned their census forms by signing the form and sending a picture of the form to census@southboroughma.com.

We ask residents to return these forms to us now before they just end up in that pile of old mail that we all seem to have at our homes.

If a resident doesn’t return the census, the state requires the town to pay the cost of sending a postcard with a pre-paid return postcard to every voter at that address. That can be pretty costly!

Residents might notice some changes in the way we conduct the census this year. Based on feedback from residents, we no longer send the forms to ‘current resident or….” Instead, we send a separate letter to each household, or former resident if they are still on our voting list. This will allow us to identify who no longer lives in Southborough and work through the process to remove them from the voting rolls. It also protects the privacy of both current and former residents.

Last year, Hegarty shared answers to Frequently Asked Questions. Here are the ones that still apply:

Why do we send out a Street Listing every year?

What happens if you do not return the Street Listing?