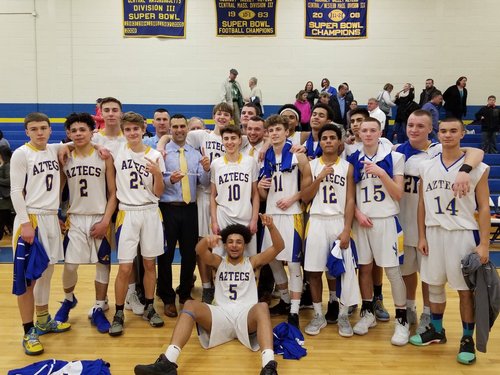 Above: Assabet’s Aztecs had news worth tweeting about last week and continued to triumph this week. (photo tweeted by @CoachCrory)

After a three-year absence, the Algonquin girls hockey team made its return to postseason play on Wednesday night at the New England Sports Center.

The 13th-seeded Tomahawks hosted No. 20 Medfield in a Division 2 preliminary round matchup, and thanks to a three-goal third period managed to pull away with a 4-0 victory.

Algonquin (12-9) will next head to Milton to face the fourth-seeded Wildcats on Saturday evening at 5 p.m. in a first-round matchup. Medfield’s season ends at 7-8-6. (read more)

The previous night, 7th seed Gonk Boys Basketball played in its First Round of sectionals. They bested lower seed Acton-Boxborough 73-53. Friday night at 7:00 pm, the Boys will take on Wachusett’s 2nd seed team in the Quarter Finals.

On Tuesday I “posted” a sports update that somehow never came up on the blog. So, apologies for not letting readers know that ARHS Girls Basketball headed to sectional Quarter Finals yesterday.

In Monday’s post, I failed to share news of our other high school’s big basketball triumph last week. (That was also in Tuesday’s missing post.) The Community Advocate wrote:

The Aztecs were 2nd seed going into their Division 4 sectional playoffs last night. They beat 15th seed Millis in the First Round, 73-65 . Tomorrow night, they’ll hold court against 10th seed Abbey Kelley at 7:00 pm. You can follow their bracket here.

As I previously posted, a few ARHS athletes qualified to compete in New England championships this weekend. For a reminder on those details, click here.

I had also shared that, ARHS Boys Hockey ranked second seed for their sectional tournament and earned a BYE on the Quarter Finals. Details are now in on their Monday night Semi Finals. They’ll be playing Auburn at the Wallace Civic Center at 5:00 pm.