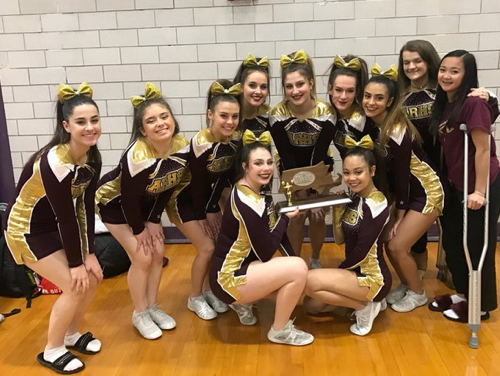 Above: T-Hawks Cheerleaders came in second at their Regionals over the weekend (image cropped from tweet by @ARHSAthletics)

Algonquin had an exciting weekend in winter sports.

One team that surely got pumped up over their victories was the school’s Cheerleaders. They ranked 2nd in their own District competition yesterday. That means they’ll be heading to the State Championships this Sunday, March 11 at Whitman-Hanson Regional. The time is still TBD.

The squad wasn’t needed over at WPI yesterday to get the T-Hawks fan section cheering. Gonk Boys Basketball making school history did the trick. In the District Semi Finals the Boys took on an upper seed team they lost to earlier in the season, St. John’s. They redeemed themselves with an 82-70 win.

That puts them in the Division 1 sectional Finals, apparently for the first time ever. The Boys will return to WPI’s court on Friday, March 9th at 6:00 pm. They’ll be pitted against top seed Franklin to vie for a spot in the State championships.

Algonquin/Hudson Girls Hockey is already in their State playoffs. The 13th seed team overcame the odds to stay in it through their First Round on Saturday night. They beat 4th seed Milton 3-1.

That puts them in the Quarter Finals against 5th seed Dennis-Yarmouth. They’ll face off on Wednesday night, March 7th, 6:00 pm at O’Brien Rink in Woburn.

Also on the ice this week is Gonk Boys Ice Hockey. As I’ve previously posted, they play in the district Semi Finals tomorrow night at the Wallace Civic Center at 5:00 pm. They’ll challenge Auburn. It’s a lower seed team that managed to tie them earlier this season 1-1.

Now, following up on individual ARHS athletes who competed over the weekend at New England Championships. . .

At the Indoor Track championships, another school record was broken. Tess Reyes ran a 5:02.1 mile, coming in 3rd place. Alex Lemieux came in 6th place for the high jump.

Algonquin Wrestling’s Andrew Goddard pinned his first opponent, but lost the next two.

None of the three will be graduating this year, so expect to see their names pop up again next winter.