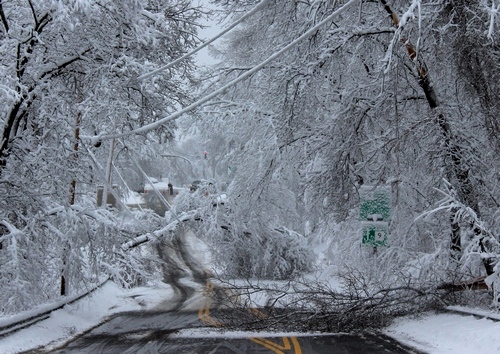 Above: Messes like this one caused power outages and issues all over town a few weeks back. Though power has long been restored, there is still cleanup to be done. (photo by Joao Melo)

I’ve heard grumblings about tree debris on the ground and broken, dangling branches. “When is the Town going to clean it up?” Last night, the Public Works Superintendent addressed the ongoing problems from the big Nor’easter in early March.

Karen Galligan told the Board of Selectmen that some “dangles” people complain about are literally out of their reach. The DPW relies on National Grid to return with its bucket trucks for more clean up of those issues.

As for brush on the ground, DPW has been hard at work chipping away at it. (Again, literally.) Workers have had to grapple with digging out brush frozen into the ground by rain followed by snow. And they are making their way around town, using their chipper to dispose of broken limbs.

The DPW head said that some debris is the responsibility of residents whose own trees broke. BOS Chair Dan Kolenda responded that some residents dragged Town trees onto their properties to get them out of the way. Galligan acknowledged that. She said they know where those trees came from and will be responsible for those.

During the update, Galligan explained that during days immediately following the storm, her crew was constrained on what it could do. They worked to move debris, but only for limbs not touching wires. To deal with those, they had to wait for NGrid crews and follow them around, cleaning up after it was safe.

The information was part of an update by the safety chiefs on Town’s personnel efforts during the storm. The discussion praise from selectmen for Town Police, Fire and DPW employees for their work during those difficult days.

Selectmen were enthusiastic about emergency personnel’s interaction with residents in need (with individual instances of employees going out of their way), the setting up of a warming center, and other efforts.

In turn, the safety chiefs expressed appreciation, not only of hard working employees, but also of the many residents who showed them support. That included examples of people who brought them food and coffee throughout the ordeal.

Galligan summed up her update by saying that residents have been very patient. With another storm on the way, she hoped they would continue to be.

It would be really nice if the DPW workers hadn’t taken a huge tree branch that fell off a town tree and instead of getting out and picking it up, just backed into it with the truck pushing it onto my property, breaking my snow sticks and digging up the lawn. Way to go! That is just plain lazy!

At the beginning of the winter season, DPW must drive down our roads and check to see which town owned trees appear to be dead, limbs that are crossing onto utility lines, and branches that are precariously hanging. Perhaps if this were done, we wouldn’t lose power every winter. Owners with their trees in similar condition, should address their need to cut the branches and trees as well.

And I assume you think this would happen for free? As soon as the town raises taxes a penny to pay for it, you will be the first to complain. Just another “more services, less taxes” hypocrite.

Many thanks to all of our Town employees for their hard work during the storms! We are fortunate to live here and our family and neighbors were confident things would be handled and felt safe. Think of how lucky we are to know whom to call and actually get answers. We had emergency alerts on a regular basis. ( For those who may be unaware, you should submit your contact information, such as cell phones, to the police in order to receive the town-wide emergency alerts, especially if your power is out and other communications cannot get through.) And finally, neighbors were helping neighbors, all over town.
Fortunate indeed. A good place to live. Let’s please be patient as the clean up continues. It may take weeks to finish.

On a similar note, this seems like the kind of storm that the town should be helping residents with. Many places allow residents to put limbs to the street on a particular day and the town will come and take them/chip them. I have too much debris to feasibly take to the xfer station by car. At the very least a message saying yard waste can be taken to the xfer station in unstickered vehicles, so that I can borrow a friends truck or something. Outside of one of those two things happening, I’ll have to have a big bonfire to get rid of it all once it dries out a bit.

DPW town resources have been stretched here and throughout the county. This is New England and damage will occur when there are extreme weather events. Government cannot do everything all the time.

Yes, Please.!! That is a great suggestion. We will have a difficult time removing all of these branches or hiring the very busy tree companies. If the DPW could make arrangements for us once they have finished their cleanup, that would be wonderful.

Another suggestion might be for the boy scouts who pick up Christmas trees to arrange a pick up day for our tree branches for the similar donation amount? Please think about it and let us know. That would be VERY helpful and give our money to the scouts!

Thanks to all the DPW workers who worked long hours and under difficult conditions. And also to the National Grid crews aand the tree crews who helped them. These were unusual storms.

Driving around town, it looks like a nuclear blast. Broken limbs, trees are everywhere. There isn’t any reason why the DPW can’t start picking up the tree debris now. This is their job. This is what they’re paid for.

Has a determination been made as far as limbs between yards and streets? Is the town going to pick this up or should homeowners be piling and getting rid of them?

I’m not sure what you mean by “between yards and streets”. Do you mean sidewalks?

The DPW has said they are responsible for Town trees, homeowners responsible for own debris. If you have a question about a specific area (e.g., limbs in front of your home that you think DPW should be responsible for) I suggest contacting them directly: https://www.southboroughtown.com/public-works-dpw

won’t this create a situation where the receptacle for yard debris at the Transfer Station is in a constant state of overflow?
Seems like this will create its own workload for DPW and/or force residents to return home with their debris only to come back to same situation again…

I’m for a one time pass thru town by DPW to grab what large branches we can all move to curbside.