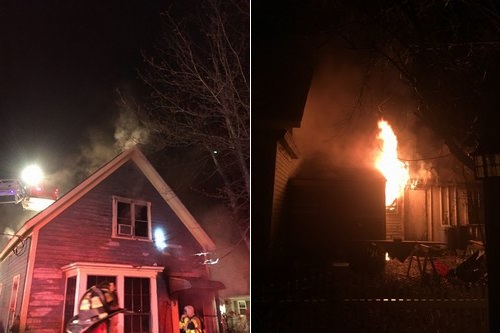 Above: Southborough Firefighters, with help from several towns, put out a fire in the middle of the night. But the small home on Cottage St suffered serious damage. (photos posted by SFD on Facebook)

A heavy house fire on Cottage St was reported around 2:00 am this morning. According to the SFD, Firefighters from Southborough and surrounding communities put it out within 25 minutes. But, based on other reports, it sounds like the house is likely a complete loss.

It appears no people were seriously injured, though a woman living in the home was brought to the hospital for smoke inhalation and two pets died. TV 7 reports:

Firefighters responded to the fire around 2 a.m. on Cottage Street.

The woman is recovering at the hospital and is expected to be OK. Her husband was not injured, and says he believes their home is a total loss.

Officials said the fire started in the kitchen, which is located at the back end of the house.

The cause of the fire remains under investigation.

Bill Kane, the bass player for a popular local band, and his wife, Cheryl, are safe after a devastating early morning fire at their 1869 cottage-style home.

Although Cheryl was taken by ambulance to a Boston hospital for observation after inhaling smoke, the couple, who have lived in the two-story home at 9 Cottage St. for 16 years, lost two beloved pets in the fire, a pit bull-shepherd mix they called Pup and a black-and-brown tabby cat, Sage, Kane said.

Although the wooden structure appears completely gutted, firefighters were able to save some of Kane’s collection of more than 30 guitars. (read more)

At approximately 2:00 this morning Group 3 was dispatched for a reported house fire on Cottage st. First arriving companies found heavy fire showing from the rear of the structure, and immediately struck a 2nd alarm bringing mutual aid from surrounding communities. Heavy fire was knocked down within 25 minutes with crews remaining on scene through the night for overhaul and investigation. One civilian was transported to a local hospital for smoke inhalation. Many thanks to our mutual aid communities: Westborough, Hopkinton, Ashland, Framingham, Marlborough and Northborough Fire Department’s

Selectwoman Lisa Braccio also posted the news to Facebook, with intentions of organizing help for the family:

The house is a loss and this family could certainly use your prayers. The wife is hospitalized and my heart breaks for how this family must feel. We are an amazing community and I am hoping we can all come together for a family devastated by such horrible loss and give them the support they are going to need. I am going to be coordinating something once I get a better idea of how we can best help them recover, and would appreciate any help or suggestions.

When I learn more about any support efforts, I will be sure to share.

There is now a GoFundMe set up: https://www.gofundme.com/bill-and-cheryl039s-fire-recovery