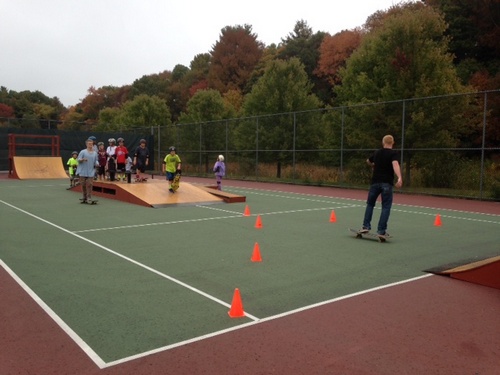 Above: Did you know that Southborough had a skate park? (contributed image)

Southborough Recreation is reevaluating the “skate park” at Finn School. Before they determine a course, they are seeking public feedback.

The skate park will be discussed at the April 23rd meeting. So, they’re hoping for people to respond soon. But, before you complete a survey, Rec wants you to better understand the history behind the park:

In 2003 Recreation began to offer skateboarding in our after school program (RAP). The program took place at an indoor facility in Shrewsbury. Participants would be driven to spend the afternoon skating at the indoor park. This lasted for several years until that park closed.

At the time, skateboarding was becoming very popular in the Town and as a result we found skaters skating in unsafe locations and sometimes damaging public property. Recreation stepped up its programming efforts to offer skateboarding classes in school parking lots. Teaching skaters how to do tricks and proper etiquette and respect when out in public. Every class that was offered filled and the sport continued to grow.

In 2009, recreation worked with local skaters to figure out where to put a park and how to get the funding. Unfortunately, both were huge obstacles. No one wanted a skate park in their neighborhood, the economy was at a low and Southborough didn’t qualify for grants.

In 2014 the Recreation Director asked the Commission for a compromise, to build a wooden skate park on a tennis court. The tennis courts, located behind Finn School, were not used often (at least the one where the park is located) as they were extremely pitted, and not optimal for play. We also knew that the Richardson Courts (Neary School) were going to be resurfaced which would potentially increase play at that site.

The park was built with a combination of a grant and program fees collected for the skateboarding classes. We held classes at the park for several years later and they always filled up (10+ each class).

The Recreation Commission would like to gather public input regarding the skate park before making a decision whether to dismantle it or repair and keep it open.

Thank you for your time.

At the end of the survey, Rec shares:

There will be a Recreation Commission meeting on Monday, April 23rd at 7pm at the Recreation Department (South Union School building) at which this will be discussed. The general public is invited to attend.

Sorry to be the voter who would like some ANSWERS and ACCOUNTABILITY first from Recreation – but what about the questions below? It may be best to understand the larger picture first, especially from a management and total funding standpoint, instead of piecemeal.

Has anyone driven by 9-11 Field lately? It looks like Gillette Stadium with artificial turf and other materials piled very high. There were some good questions raised at Town Meeting, including an inquiry on the composition of artificial turf. Generally speaking, these materials are made of petroleum products (and even crumbs of tires) which as they break down over time, allegedly and reportedly can be inhaled by children.

Did anyone look into what the composition of the materials that have been purchased, BEFORE they were purchased? The money was spent, but was any health-related due diligence conducted first? Other states and areas have already grappled with some of these questions.

PLEASE CAN ADVISORY OR ANYONE take a look at the following website:

Also, last year’s three day town meeting had a number of Recreation warrants, including one for lights. I think the number was $400,000, a lot of money. Later in the year, there was some issue about lights not plugging in. This was discovered by accident by a resident driving by noticing generators — why are generators being used. However, that illuminates much larger questions regarding how and why this happened and the lack of due diligence. Who / what contractor was paid this amount of money — who got the check? What was the total cost of the project, including the remedies? Why did the taxpaying public not learn of this through Recreation and/or BOS at some public meeting? How does this procurement and implementation alleged mis-step be prevented in the future.

Seems to me that Recreation comes with its hand out for enormous amounts of money at the expense of other equally important capital needs, many of which go unaddressed.

It makes no sense to have the taxpayers green light more spending, with little adequate addressing and owning up to the lights (and 9/11 Field — turf — who was the contractor on that one and how much was that outfit paid — how much was the fix — same questions) when proper management and procurement processes need to be in place first. How much is the big picture – not bits and pieces?

The total cost to taxpayers on last year’s items seems to be missing from the discussion. The other missing piece is simply an explanation on who walked away with these payments and why wasn’t the cost to cure included? Didn’t the vendors have some responsibility on these matters?

Can Advisory or someone who knows about these matters please provide answers to the taxpayers first? Shouldn’t all sides of the health studies done be examined first before purchases? Isn’t the health of our children first when it comes to even the slightest the possibility of inhaling degraded particulate matter from petroleum based products?

My two cents is in support of fixing 9/11 field and continuing to question the lights at Mooney.
While there is some evidence to concern yourself with the materials in the synthetic fields, none of the kids are on it long enough to really cause damage in my opinion. (Not a doctor, but coach and parent.) That and the youngest are generally on the grass fields and the older kids on 9/11. The original carpet lasted around 10 years and that seems to be the length that they are expected to last. A turf field allows for a wider range of weather than the grass fields and that is a good reason to have one at the disposal of the local towns. This is New England and as we can see now, weather is a factor in all the outdoor sports.
The lights on the other hand are a huge draw on resources for a very narrow group. Unfortunately, when it came time to vote, the baseball folks were very well represented in Town Meeting and the opposition was hopelessly out matched. I believe that at least some on the Advisory Board saw the waste and voted against the expenditure, but were out voted fair and square.
I applaud the efforts of the Recreation Department to keep things running and come up with new programs to address the changing needs of our townsfolk. They have all done a good job, but as with any project or projects, some items can fall through the cracks and the circuit issue at Woodward is that type of thing. __it happens in the private and public sector and is a fact of life.