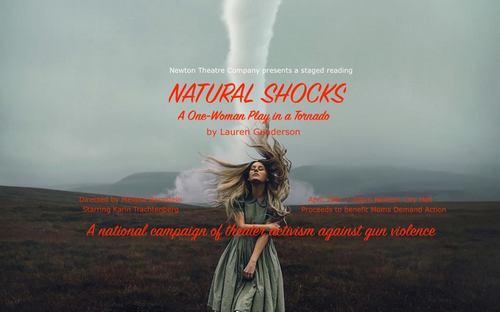 Newton Theater Company is holding a special one woman show this Friday, marking the 19th anniversary of the tragic school shooting at Columbine. It is being performed by Southborough’s Karin Trachtenberg.

Trachtenberg will give a stage reading of Lauren Gunderson’s “Natural Shocks”.

The one-woman show and subsequent talkback are part of a national campaign of theater activism against gun violence. The free performance will be held at [Friday, April 20th at] 7:30 PM in the Cultural Center Auditorium at Newton City Hall, 1000 Commonwealth Avenue.

Admission is free, though donations are suggested to Moms Demand Action. The Newton show is one of many readings being held across the country that day (royalty-free) in support of the anti-gun violence movement.

The play is described as:

Based on Hamlet’s “To be or not to be,” Natural Shocks is a new 65-minute, one-woman tour-de-force play that bursts to life when we meet a woman waiting out an imminent tornado in her basement. She overflows with quirks, stories, and a final secret that puts the reality of guns in America in your very lap. The play is part confessional, part stand up, and part reckoning.

Southborough Wicked Local followed up with Trachtenberg to find out why she was involved in the effort:

If you’re having trouble recalling that shooting, you’re forgiven. It’s a little hard to keep track of them all. On Dec. 14, 1992, a student opened fire at Bard College at Simon’s Rock in Great Barrington.

“My neighbor’s nephew was one of the kids who was shot,” says Trachtenberg. “It was horrible and tragic, but we thought that was the end of it.” . . .

Trachtenberg’s new gun nightmare is a reoccurring one – it’s the ALICE drills at Algonquin Regional High School in Northborough, where her daughter is a freshman.

“ALICE” is a pretty acronym for something that’s actually quite ugly: Active Shooter Response Training.

“They are training students how to deal with life-and-death situations,” says Trachtenberg. “The students are taught to either ‘evacuate,’ ‘shelter in place,’ or ‘confront.’ It sounds like they’re in a war.”

So when Trachtenberg heard about a national campaign of theater activism against gun violence, she knew she wanted to be part of it. On Friday, April 20 at the Newton City Hall auditorium, Trachtenberg will participate in one of more than 25 nationwide readings of “Natural Shocks,” Lauren Gunderson’s one-woman play about gun violence. . .

The actress thinks the conversations should continue long past April 20.

“I hope the play will spur their own inner dialog about violence in America,” she says. “I hope they’ll be reinvigorated, and they’ll get involved in what’s happening in their communities and their schools.”(read more)

For more details on the Newton performance, click here.