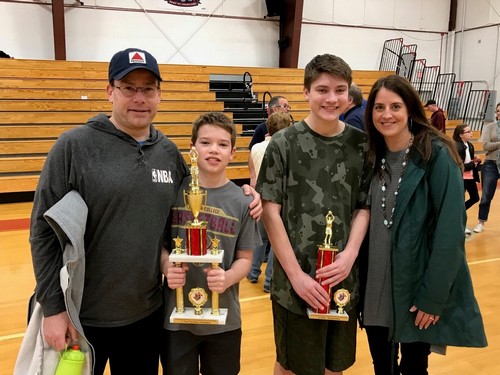 Above: Two Southborough residents made it to the state level of the Knights of Columbus Free Throw competition. One scored first place for his category. (contributed)

This January, Southborough’s Knights of Columbus held their annual Free Throw competition. Two of the winners made it through district and regional championships to compete in the State Championship over the weekend – Jake Blackburn (11) and Liam Shields (14). For the second year running, Blackburn came in first place for his age group.

For more details, scroll down. But first, here are some more photos from the competitions:

Here’s the announcement from the K of C:

Southborough’s Jake Blackburn won his 2nd Consecutive State Free Throw Championship Saturday April 14, 2018 at Anna Maria College in Paxton as an 11 year old. Liam Shields also competed fiercely to be State Champ coming up just short in a tight competition for the 14 year old boys. These 2 represented a much larger field of Southborough Competitors who battled their way out of the local, district, and regional competition that began in January at Trottier School. 1st Place Winners at the local level included:

This annual competition has boys and girls ages 9 – 14 shooting 15 Free Throws each with the high score winning.
Thanks to Conigliaro Block for sponsoring the competition.