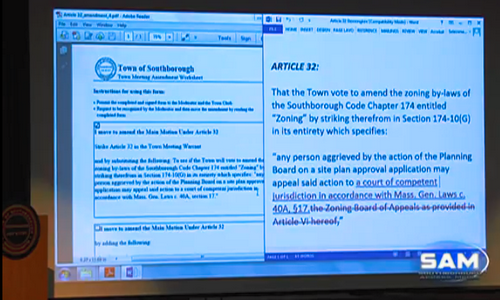 Above: An amended Article 32 spurred debate and some confusion at Town Meeting, then failed by two votes. It appears that the Town will be bringing back some version of the Article at a Special Town Meeting compelled by two voter driven initiatives. (cropped from SAM video)

Based on two filed Citizen Petitions, a Special Town Meeting has been called for next month. For any other residents looking to get items on the Warrant the time to act is now.*

This will be the third consecutive year that Southborough has held an STM. As of this morning, three Articles are potentially on the May Warrant. All three relate to process and rules around the Zoning Board of Appeals. And all three have roots in the controversy surrounding the ZBA’s handling of Park Central decisions.

According to Town Administrator Mark Purple, the Warrant will include two citizen’s petition Articles. The Board of Selectmen have also agreed to bring back Article 32 from the Annual Town Meeting earlier this month. That Article around an appeal process related to the ZBA was the subject of some confusion at the Annual Town Meeting. It failed by two votes on the sparsely attended second night.

According to Purple, other articles may still be submitted for consideration by the Board for inclusion in the warrant. I don’t have an official date for their closing of the Warrant. But the board will be meeting on Tuesday morning to consider language. So I’d act fast if you have something to request.

Purple indicates selectmen have voiced opposition to adding Articles that have a financial impact. (Though, they didn’t officially vote on that.) That makes it unlikely that the Town will sponsor reconsideration of failed Recreation Articles from Town Meeting. (Of course, residents have the right to add additional Articles to the currently open Warrant as long as they have enough petition signatures.)*

Selectmen voted to hold the Special Town Meeting on May 22nd at 7:00 pm.

The two Citizen Petition Articles that compelled the meeting stem from disagreement around what the Zoning Board of Appeals quorum is and should be, and how rule changes were handled. A dispute over the quorum initially came out of appeals around the ZBA’s actions on Park Central.

A controversial decision by the ZBA was made by just three members of the board. At the time, the Town Code appeared to specify that the board had a quorum of five members, four under special circumstances. Town officials have asserted that the ZBA rules were inaccurately listed in the Town Code, since the code specified that the board was able to vote to change the rules and had.

Affadavits by Town Officials claim that the rules should have been replaced which would have removed the language around quorum. According to ZBA Chair Andrew Dennington, the ZBA was acting under a set of officially filed rules which superseded the language shown in the Town code.

This spring, the Town Code was updated based on filed rule changes and the quorum language removed. Residents have been seeking to have the Town reaffirm the quorum is and should be as originally stated.

One petition, advocated on the blog by Marnie Hoolahan, seeks to make quorum and some other language around ZBA rules a permanent part of the Town Code. It is the second attempt made to schedule a meeting on this issue after the Town determined that the language of the first Article didn’t compel a meeting. (Click here to see the final version.)

An additional petition filed is seeking to require the ZBA to get voter approval in order to make changes to their rules and regulations. (Click here to view that one.)

As for “Article 32”, that relates to the process for appealing the Planning Board’s Site Plan decisions. As currently written, the Town Code allows anyone unhappy with a Planning Board decision related to Site Plan Review to appeal it to the ZBA.

Purportedly, that option has only been taken up twice. The second instance was by the Park Central developer whose Site Plan was rejected by the Planning Board.

Developer Bill Depietri appealed the board’s denial to the ZBA and the ZBA remanded it back to the Planning Board. That has been the subject of one of many appeals filed in court around the housing development. Town Counsel Aldo Cipriano told the Board of Selectmen that a judge pointed out the unusual nature of the code.

Cipriano, Dennington, and the Planning Board have all advocated for eliminating that route to avoid pitting one Town board against another. A few outspoken residents have argued that the change would unfairly take away a free and simple appeal process that should be available to residents and small businesses.

After long debate on the Town Meeting floor, Article failed to get the 2/3 approval necessary to pass. But that failure occurred after the Article was approved to be amended. Some questions arose about the amended language plus wording on the screen. That creates uncertainty if the failure to pass was a result of confusion over the amended language vs opposition to the Article’s intent.

Voter Betsy Rosenbloom had argued against the amended version but later tried to reconsider the original motion. Town Moderator Paul Cimino rejected the motion, explaining that when the amendment was passed that “disposed of” the original Article, and it couldn’t be brought back within the same Town Meeting.

The Board of Selectmen are discussing the Warrant language at a Meeting on Tuesday morning at 7:30 am in the Town House Hearing Room.

Originally, I mistook it for a two page document asking for edits to be made to sections of the rules listed in the Town Code. Looking again, they were clearly edits to sections in the earlier draft on pages that followed. Those pages, filed with the Town Clerk state that these are new rules that completely replace the old ones in the Town Code. If that had been done at the time, the code would have made no reference to quorum beginning in 2007.

Many thanks to Ms. Hoolahan for her civic leadership in bringing the Special Town Meeting article (ZBA QUORUM) to the voters on May 22, 2018. Please mark your calendars and save the date.

The matter is detailed in the above article which contains a link to the warrant article itself, as well as Beth’s links (below) to the old and new versions of the Code (thanks Beth!): “These are the versions that were submitted as “Before” the changes that were made this week: page 1 and page 2. Click here to review the version that I found through the Town’s website this week after the updates were made.”

All citizens / voters are urged to examine three items:
1) the previous version of the publicly published code (Chapter 249—which was the publicly published version of the code until a few weeks ago),
2) the revised code (Chapter 249, Town of Southborough, eCode) – run your index finger down each version side by side to compare the changes recently made.
3) and the Citizens Warrant Article (link above).
https://mysouthborough.com/2018/03/30/town-officials-respond-to-recent-accusations/

Also, please note — unlike Planning Board, these are APPOINTED individuals, not elected.

The real takeaway is this: Any and all public matters, such as Town Code, should be discussed in detail publicly and not done without public knowledge and approval.
There was no public discussion of quorum changes.

WHO ON THE BOS KNEW THAT THE PUBLICLY PUBLISHED CODE WAS CHANGED A FEW WEEKS AGO? Why has there been no public meeting on this matter? When is BOS going to answer this question?

The voters deserve transparency and an answer to this key question.

Ms. Hoolahan asks very important questions in her comments (link above):
“ Do you, the voters, want THREE appointed individuals making major, high-impact decisions for this town?
Do you, the voters, want to return to a FOUR person quorum and reinstate the language that has been governing that board for decades?
This town is facing changes and potentially high impact developments. With all due respect, Board of Selectmen can come and go – but the impacts of unsafe and ill-located development will impact you and your family forever. How can every registered voter help?”

Please save the date and come to SPECIAL TOWN MEETING ON MAY 22ND AT 7:00 PM. Thank you!