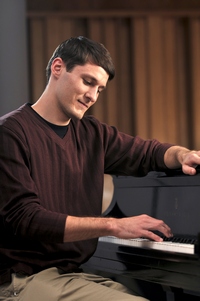 Right: Award winning composer Keane Southard will return to his hometown to perform at Pilgrim Church this weekend. It follows the day after his own composition will be featured by a local symphony orchestra concert. (contributed photo)

Another musician with roots in Southborough is returning home to share his music. This Sunday, Keane Southard will be performing “Piano Music from Four Continents” for the public at Pilgrim Church.

That recital will take place at 1:00 pm on April 29th. His program will include works by John Foulds, Camargo Guarnieri, and his own personal compositions. (Admission is free although donations will be accepted.)

The Southborough native has made a mark since graduating Algonquin, both as a pianist and composer:

Southard has performed as a pianist across the country, including at conferences and festivals in Colorado, Ohio, Illinois, and Missouri. He has performed as a soloist in his own “Classical” Concerto with the Sounds of Stow Orchestra, and in his Concertino with the Northeastern State University Wind Ensemble. As a composer, he has been the recipient of many awards, including the 2016 Colorado State Music Teachers Association Commissioned Composer Award, and 3rd prize in the Belvedere Festival Composition Contest. He was a Fulbright scholar studying music education in Brazil, has taught at Bennington College, and holds Masters degree in composition from the University of Colorado-Boulder. He will begin work on his PhD in music composition at the Eastman School of Music in the fall.

Southard shares of the Sunday concert:

The piano repertoire is so vast. . . that there are many wonderful pieces that haven’t made it into the standard repertoire yet deserve to be more well known. For the audience, it is a bit of a risk coming to a recital where you may not recognize the pieces or composers, but my hope is that people will walk out of the concert wanting to further explore these composers.

Additionally, his recital will include:

spoken insights, personal connections, and stories about the music and their composers to create an engaging and informal concert experience.

The recital follows a special concert the night before. On Saturday, Southard’s composition will be played by an area orchestra:

On Saturday, April 28th at 7:30pm, the Claflin Hill Symphony Orchestra will premiere his “Appalachian Trail Symphony: New England” inspired by his 2016 hike of the New England portion of the trail.

That concert is at the Milford Town Hall. (Click here for ticket information.) For more information about Southard, click here.