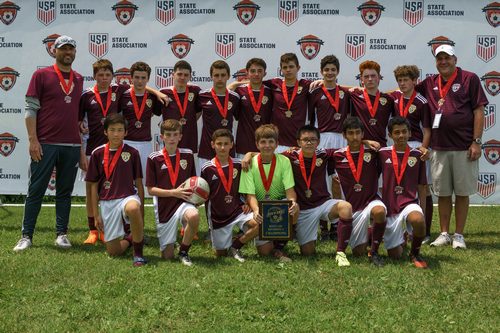 Earlier this month, Southborough Youth Soccer bragged about 7th and 8th grade winning the BAYS league championship. The boys earned the right to play in the state tourney – the Massachusetts Tournament of Champions. Over the weekend, the boys finished their journey on top.

For only the third time in the 44-year history of Southborough Youth Soccer, our town has won the Massachusetts Tournament of Champions. MTOC is a season-ending tournament that brings together champions from town-based travel leagues from across the state. The boys 7/8 grade team swept the tournament outscoring their opponents by a 15 goal margin over the five tournament games including a 3-0 championship win over Westwood in the final.

You can get a better look at the champs by clicking on the thumbnails below.

A wonderful achievement. You all should be super proud! Thanks to players, parents, coaches and SYSA for representing.