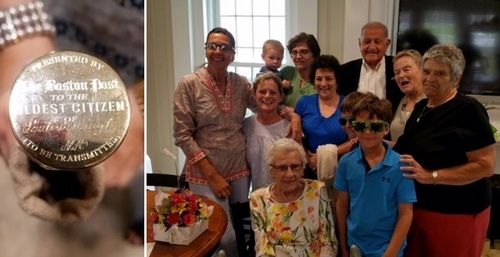 Above: Caroline Pessini was surrounded by loved ones for a special ceremony presenting “the cane” to Southborough’s oldest citizen. (images cropped from photos by Michelle Jenkins)

The Town of Southborough reinstituted an old tradition this week. Our oldest citizen was presented with “the cane”. The honor went to 99 year old Caroline Pessini.

At a recent Board of Selectmen meeting, Chair Lisa Braccio previewed that the Town would be making the presentation. Braccio explained that presenting the Boston Post Cane was an old tradition that had fallen by the wayside.  She said that a replica of the cane was made for a ceremony that would be held at the Senior Center this week. She was mum on who would receive the honor at the time.

The New England tradition dates back to the early 1900s. (You can learn more about it here. According to the website, Pessini wouldn’t have originally qualified for the honor. The change to include women was made, with some controversy, in the 30’s.)

Braccio informs me that former Town Clerk Paul Berry retired Southborough’s original cane years ago. He made the decision to avoid the fate that other Town’s canes suffered with canes either misplaced or never returned when the holder passed. The original is now preserved in the Town’s vault. Presenting a replica allows the recipient (and family) to keep the cane.

As Pessini’s younger brother, Berry presented the cane to her at yesterday’s ceremony. They are the last of 10 siblings.

I was unable to make the event, but Southborough Wicked Local covered it:

“[Pessini] has lived during the most eventful century of this world’s history; and has been a positive influence on those around her and to her community, never hesitating to lend a helping hand whether to her family, a friends or acquaintance,” Braccio read from a proclamation.

Even though she knew about the presentation, Pessini was surprised at how many showed up to the ceremony.

She grew up in Fayville.

“We played ball in the street, jumped rope,” she said. “It was a small town. It was beautiful. You knew everybody. If someone was sick we would all make something and bring it over.”

Below are pics taken by Michelle Jenkins and contributed by Braccio. But it’s worth checking out SWL’s story for some lovely photos that captured the emotions.