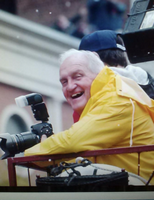 He was beloved husband of the late Jean (Carter) Maley who passed away in 1996.

Born in Binghamton, NY, he was the son of the late Elizabeth (Byrne) and John H. Maley, Sr. Jack was a graduate of the former Peter’s High School in Southborough, class of 1941, and was a decorated US Army veteran serving in WWII. After his tour of duty in the Army Jack followed his passion and went to photography school and became a photographer for the MDC for 45 years. As an avid Red Sox fan, he was delighted when he had the opportunity to become the Red Sox official photographer in 1975, retiring 2013. He holds two World Series rings. In addition to his other jobs he had a photography studio in his home and with his wife’s help he was able to photograph many weddings, anniversary celebrations, senior pictures and family photos for the people of Southborough and other surrounding towns. As much as he enjoyed taking pictures, his greatest joy was spending time with his family.

He was predeceased by his brother, William Maley.

Calling hours will be held on Thursday, November 1, from 4 to 7 pm at Morris Funeral Home, 40 Main Street, Southborough.

A Funeral Mass will be held on Friday, November 2, at 10 am at St Anne Church, 20 Boston Road, Southborough. Burial will follow in the Southborough Rural Cemetery.

Memorial contributions may be sent in his memory to Southborough Community House, 28 Main Street, Southborough, MA 01772.

To leave words of condolence to his family please visit morrisSouthboroughfuneral.com.

[Editor’s Note: I have fond memories of my former neighbor, always ready to greet with a big smile. Metrowest Daily News ran a great interview with him two years ago. You can read that here.]