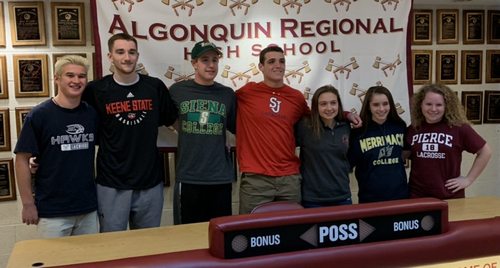 Topping the list is time sensitive news – an early start to Thanksgiving Football.

With low temps forecast for Thursday morning, the high schools are moving up the traditional T-Hawks v Rangers game to Wednesday night at 5:00 pm. Tickets are available in the ARHS athletic office until 11:30 am tomorrow for $5 each. $10/ticket at the game.

Speaking of ARHS Football, the Athletic department proudly tweeted about the team spirit that made it possible for Freshmen and JV teams to play their final games this weekend:

Annual Freshman/JV football game vs. Westboro (ppd last night due to weather) recognition goes to the entire football program. They spent 5 hours shoveling the entire stadium field so they could get the games in today. That’s leadership and dedication! pic.twitter.com/psmIujFmel

Over the weekend, the school finished state tournaments. But it looks like one team may be headed to Dallas soon. ARHS Athletics tweeted:

The performance cheer team placed 11th at States and received the first bid to nationals in program history!

Cross Country reached the end of its road at All States. Tess Reyes outpaced 170 other runners to come in 8th in the Girls 5K on Sunday. The Boys team came in 19th place overall and Girls 20th.

Thanks to emails and local news, I can share that several athletes with links to Southborough signed National Letters of Intent to play college sports last week.

Seven Algonquin students gathered to announce their choices. Click on the thumbnail below right for a better look:

Of those, Westborough Wicked Local zoomed in on Carreras and his choice to play Lacrosse at St. John’s next year:

“It’s just an amazing feeling to realize a dream of mine to come true,” said Carreras on what it was like putting that pen to paper and signing that letter.

Carreras first realized that he wanted to play at St. John’s when he went to a prospect camp in the summer about a year and a half ago, where he ended up meeting with the coaches.

“It was a prospect day. I got an email for it and it ended up working out for both of us, they ended up finding a hidden gem.” (read more)

Another Southborough resident, currently attending a far flung school, signed on to play Lacrosse at Syracuse University next year. JJ Levandowski used to play Lacrosse in town as a Neary and Trottier student. These days, he’s attending IMG Academy in Florida.

Levandowski attended St. Mark’s School freshman and sophomore years. That school has news of it’s own with two VI Form students singing on to NCAA Division I universities: