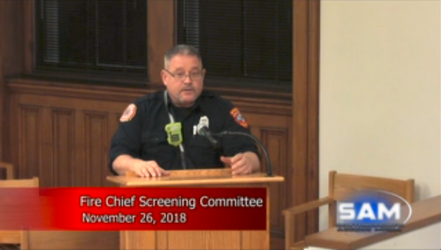 Above: The only resident to publicly comment on what he’d like to see in the next chief was a member of the SFD. (image from Southborough Access Media video)

On Monday night, the Fire Chief Screening Committee held a forum to seek resident feedback on what we want/don’t want in our next chief. They didn’t really get any. But the committee reminded residents that they can still submit letters.

The forum for residents was sparsely attended. After multiple prompts for comment, the only resident who rose to speak was a member of the Southborough Fire Department. EMS Director Scott Navaroli thanked the committee for asking personnel what they want.

Navaroli told the committee that he personally wanted to see someone who:

has the best interests of the Town and residents of the town. That’s first and foremost. We serve them. . . whoever you put in there will have the same tenacity to serve the public like we do.

The meeting wasn’t a bust. It also provided the committee with a chance to update the public on the process. Chair Jason Malinowski explained that an ad had been posted to publications in the fire community. Resumes and letters of intent were accepted through the Tuesday of last week.

Committee discussion about who responded (including internal/external) were to happen after the forum in Executive Session. The information will be kept under wraps for some time to come. The committee’s job is to narrow those candidates to 5 or less. That’s where their job ends.

The selected candidates will be sent to an assessment center. That should result in finalists for selectmen to choose from. The Town has a consultant assisting the process.

Community feedback is meant to play into the Committee’s work to narrow candidates. That includes feedback from SFD personnel. The committee requested that through emails and the union e-board.

Malinowski said he has had several conversations with personnel that were “remarkably consistent.” At the next committee meeting, he plans for all members to report out what they have heard. He expects that to be broad themes.

If you want to weigh in with your thoughts, email the chair at jmalinowski@southboroughma.com by Monday, December 3rd.