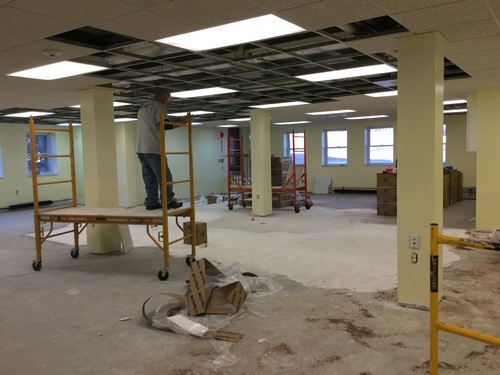 Above: The Children’s Room is starting to shape up. But paint fumes mean temporary closure of the entire building this week as the downstairs paint job gets finished. (contributed image)

The Southborough Library is being forced to somewhat suddenly close its doors for several days again. But there’s a little more notice than the mid-morning closing in September and a silver lining.

Progress has been made on repairs to the flooded downstairs section. Workers began painting recently. The yellow walls look cheerful, but the smell hasn’t been great for Library goer spirits.

The fumes proved to be too much for visitors. (I’m sure it was pretty unpleasant for staff, as well.) Now the decision has been made to close the building for further painting to resume tomorrow.

In order to ensure that the Southborough Library provides a safe and healthful environment for its staff and patrons, the Library will be closed from Tuesday, December 11th through Saturday, December 15th during the painting and flooring phase of the reconstruction of our lower level.

We regret any inconvenience this may cause. Thank you for your understanding and look forward to resuming services at our normal hours of operation on Monday, December 17th.

Unfortunately, it will still be some time before the Children’s Room can reopen. New shelving on order is expected to arrive in January. Once shelving is installed, the books will need to be pulled out of storage and reshelved.

Management expects the room to be ready to open this winter. But that may not be until late January or early February. I’ll let you know when the timing is more certain.