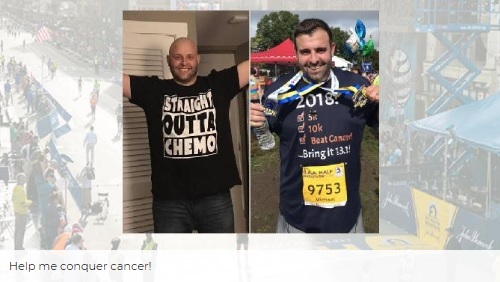 Above:  Mike Saltis’ is upping his game this year to a 26.2 run raising funds to help “conquer cancer”. (image from his fundraising page)

Southborough has always had an impressive showing at the Boston Marathon, and this year is no exception. Between now and Patriots Day, I’m featuring stories of resident runners donning bibs for a cause.

Last April, Michael Saltis learned he was officially in remission. This April, Saltis is excited to be helping the organization that helped him get there.

Saltis is one of four Southborough residents on this year’s Dana-Farber Marathon Challenge team. His fundraising page shares:

DANA-FARBER literally saved my life – the least I can do is run a few miles and raise a few bucks!!

In April 2018, I received the news that I was officially in remission following a diagnosis of Stage IIA Hodgkin’s Lymphoma and 6 months of bi-weekly chemotherapy treatments. With the amazing support of my wife, my family and friends – I had done it, beat cancer!

The following months were spent getting back to a ‘normal’ life. Along with the flurry of follow-up appointments, I was able to return to traveling for work (which had been temporarily suspended during treatment), resume going on vacations, hanging out with friends, and just getting out of the house more and doing things. I also had signed up for the Boston Athletic Association Distance Medley and completed the 5K, 10K, and Half-Marathon! 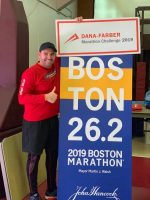 On April 15, 2019, I will take to the streets, along with hundreds of Dana-Farber runners to participate in the 123rd Boston Marathon®. The Dana-Farber Marathon Challenge team runs and raises funds with thousands of special people in mind. From Hopkinton to Boston, we carry thoughts of those people every step of the way.

100% of every dollar raised supports the Claudia Adams Barr Program in Innovative Basic Cancer Research at Dana-Farber Cancer Institute. These funds are fueling some of today’s most promising basic cancer research. Throughout my fundraising, along with this page, I will be hosting some fundraising events (raffles, etc.) so keep an eye out for additional fundraising opportunities!

Thank you so much in advance for any form of support you are able to offer, monetary or not, throughout my journey to train and run the marathon! It means so much to me and will help fight cancer!!