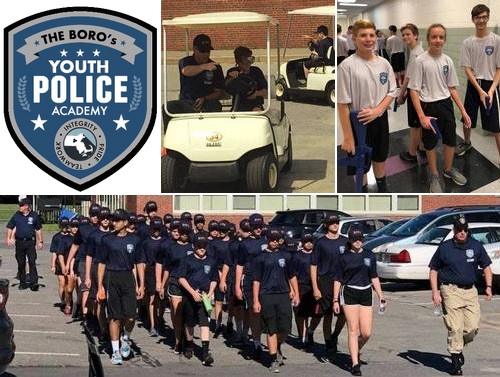 For the second summer, the Southborough Police Department is working with Westborough and Northborough to hold “The Boro’s Youth Police Academy”. Last year, the joint venture replaced the SPD’s Junior Police Academy.

This summer’s offering will take place Monday, July 29th – Friday, August 2nd in Northborough at Melican School, 145 Lincoln Street. The cost is just $50 for the week camp (with assistance offered if needed). Camp runs from 8:30 am to 3:15 pm.

To register, please send a completed application to Westborough Police Youth Academy, PO Box 1123, Westborough, MA 01581. It should include a check made out to the Southborough Police Association.

The website lists that this year the camp is open to 12-16 year olds. Organizers warn to act soon, since seats are limited. According to Wicked Local, last year’s program successfully drew in more than 30 youth cadets “and a nearly even ratio of girls to boys”.

Last summer, Southborough Officer Kevin Landry spoke to the media outlet about the success of the newly combined program:

The program featured activity-heavy days that lasted from 8:30 a.m. until 3:15 p.m. and began with the cadets being put into squads. Each squad had a squad leader, which gave that cadet a leadership role and a sense of responsibility. Day one featured teamwork and relationship-building activities to bring squads together. Other activities included repeated drilling that instilled confidence into the cadets, presentations about the dangers of opiates, defensive tactics, taser demonstrations and public speaking. . .

While the themes of the academy were often serious, the cadets were enthusiastic and having fun was an important part of the curriculum. Like a traditional police academy, a shooting range was set up outside. After learning about gun safety, the youth cadets took turns testing their target-shooting abilities with plastic pellet guns. Additionally, a trip to swim at Hopkinton State Park was scheduled.

“We realize that this is their summer vacation,” said Landry.

Landry acknowledged that most of the cadets in attendance would not choose a career in law enforcement, but the camp was not designed as a recruitment tool. He said that he hoped those in attendance would leave the academy with new friendships and more confidence than they had on the first day. He also hoped that they came away with a friendship with police officers and an understanding that there are reasons for why police take certain actions.

You can read more in the full story here.

A parent or guardian is expected to attend an informal meeting at the Melican Middle School in Northborough on July 23, 2019 at 5:30 pm. We will discuss rules, regulations and academy schedule.