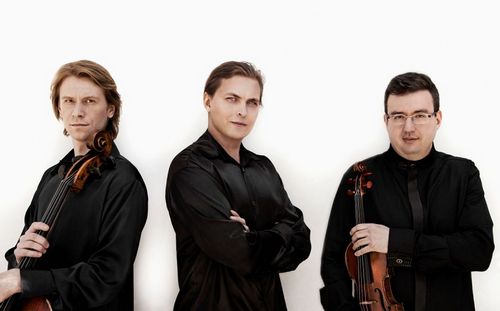 Above: This weekend, a cellist, pianist, and violinist will close out St. Mark’s School’s 2018-19 concert series. (promotional photo by by Lisa-Marie Mazzucco from group’s website)

St. Mark’s School is hosting the final concert in its “Southborough Sounds” series this year. The series is closing out with a “gala performance” by the highly acclaimed Hermitage Piano Trio.

Despite the name, only one of the three performers tickles the ivories – Ilya Kazantsev. You may recognize him from his solo performance in the concert series earlier this year. This time he’ll be joined on stage by violinist Misha Keylin and cellist Sergey Antonov.

The concert will be held on Sunday, May 19th at 3:30 pm. The public is invited, for a fee of $25 for general admission and $20 for seniors. It is free to children through high school students.

The performance will be in Putnam Family Arts Center’s Class of ’45 Hall – which the school boasts has  some of the best acoustics of any hall in the Boston area. (Click here for a map.) For those of you driving, the school directs:

The parking lot is entered at the blue sign that reads “Arts and Athletics Parking” opposite 34 Marlboro Rd, Southborough, 01772. Overflow parking will be at the Southborough Library, with a shuttle bus running to the concert hall.

Advance tickets are available online here or at the door. Either way, you may want to bring along some extra cash:

There will be a reception at the intermission at which the school’s Haiti Partnership, a student organization that supports sister school St. Marguerite’s, La Tournelle, Haiti, will raise funds by selling refreshments and also take-home baked goods.

As for the musicians, St. Mark’s promotes: 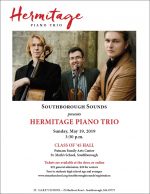 Descending from the great Russian musical tradition, the Hermitage Piano Trio is distinguished by its exuberant musicality, interpretative range, and sumptuous sound. In the same way that St. Petersburg’s venerable Hermitage State Museum both represents the very essence and history of Russia while also using its collection to embrace and promote cultures from around the world, the Hermitage Piano Trio embodies the majesty of its Russian lineage while at the same time including in its immense repertoire works from the great European tradition to contemporary American commissions. Following a recent performance, The Washington Post raved that “three of Russia’s most spectacular young soloists… turned in a performance of such power and sweeping passion that it left you nearly out of breath.”

A hallmark of the Trio is its polished skill in performing an enormous variety of music, and its wide, well-thought-out repertoire ranges from Rachmaninoff, Shostakovich, Arensky, Glinka, and Tchaikovsky to Schubert, Beethoven, Mendelssohn, Dvorak, and Brahms – the source of many of their invitations to return.

Each performer from the group comes with his own impressive resume. You can learn more about them here.