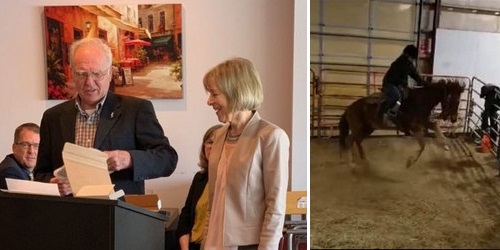 Above: Sue Baust was named Southborough’s Senior of the Year, and teen Gabby Jordan is taming and training a wild horse in an Extreme Makeover. (L-R photos cropped from contributed pic and Facebook post)

It’s time for another roundup of residents in the news.

I’m feeling a bit of “Girl Power” here in recent Community Advocate coverage of residents doing good in the community. (Though most of the ladies covered may balk at being labeled a girl.) The stories focus on four Southborough “seniors”. One of them is still in high school.

The Southborough Senior Center recently announced that resident Sue Baust was honored for her volunteer efforts. The CA wrote about it:

Baust selected as Southborough’s Senior of the Year

Baust was honored for her dedicated service to the town through her participation in numerous organizations including the Garden Club, Pilgrim Church, and as member of many town boards and committees.(read more)

A Southborough teen is participating in a program to help make wild horses adoptable. In early February, ARHS senior Gabby Jordan took on training a mustang to get it ready for a June 20-22nd competition in Kentucky, hopefully followed by its sale. The CA covered her efforts:

The Mustang Heritage Foundation created the Extreme Mustang Makeover event in order to recognize and highlight the value of mustangs through a national training competition that showcases the beauty, versatility and trainability of these rugged horses. With approximately 120 days to tame a wild horse, trainers from across America compete for cash and prizes while displaying the trainability of American Mustangs in hope of finding a suitable adopter or purchaser.

This year, [ARHS senior Gabby Jordan] decided to join the competition and is currently training her Mustang, “Foxy” in hopes of helping her find her forever home. (read more)

Earlier this spring, I shared news that Rotary was honoring residents Chris Robbins and Barbara Jandrue for their community service. The CA followed up with Jandrue to detail more about her work for the Food Pantry over the years.

When Barbara Jandrue retired early from her job as a calibration technician more than 20 years ago, she started looking for something to occupy her time. She found that something at the Southborough Food Pantry. . .

Now the director of the food pantry housed at Pilgrim Congregational Church, her duties include scheduling, shopping, organizing, picking up donations, talking with clients and a bit of everything. (read more)

Back in April, the CA interviewed a Southborough puppeteer who incorporates environmentalism into her work:

Working as a professional puppeteer throughout New England since 1974, Debbie Costine of Southborough has incorporated her skills in visual arts and education. She received the 2008 USA Citation of Excellence from Union Internationale de la Marionnette, an international puppetry association. Debuting in 2011, her most recent show educates audiences in a subject close to heart: the natural environment. (read more)