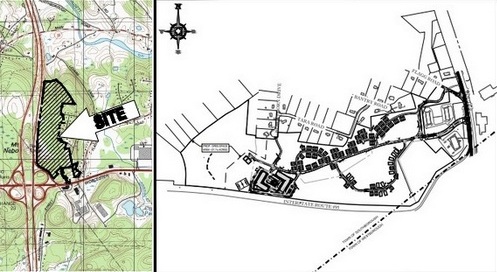 Above: Next week, the Conservation Commission will discuss modified plans for Park Central. (images cropped from plans – Note, as was pointed out by a comment, the image right should have a compass rose showing North to the left.*)

[Editor’s Note: On the morning of May 28th, the Conservation Agent asked me to let readers know that the modified application for the Park Central development will be postponed to June 20th at the applicant’s request.]

Next week, the Conservation Commission will open a hearing to review modified plans for the Park Central residential developments. Just in time, two new commissioners were appointed to Conservation this week.

The SCC unanimously agreed that the Applicant failed to meet numerous Performance Standards under the Wetlands Protection Act (WPA), and the Stormwater Management Standards under MassDEP. . .

The Applicant has proposed the use of confirmed wetland resource areas as stormwater detention basins; the impoundment of stormwater through a system designed to 1983 standards which does not meet the current 1996 Stormwater Standards or WPA regulations; and has shown a lack of understanding in how the WPA Regulations are written.

Rather than making changes required by the commission, Depietri appealed to MassDEP. Last summer, the plaintiff’s lawyer notified the court that he was filing modified plans with the state. This spring, Town Counsel Aldo Cipriano updated selectmen that “in a significant sense” the DEP sided with Conservation. The developer was expected to submit revised plans with more detail to the Southborough Commission.

Those submissions were posted to Conservation’s website on May 1st – a new Notice of Intent, Drainage Report, and Site Development Plans. You can find those here.

This week, Conservation Chair Mark Possemato addressed the “somewhat difficult position” Conservation was in with vacancies. He explained that the 7 member commission already had one long standing vacancy. They learned that two sitting members planned to step down at the end of their terms June 30th. That would leave them with 3 empty seats.

Fortunately, two residents stepped up. (It sounds like that means there is one more seat that will soon need filling. If you’re interested, see more details here.)

But only one of two could make this week’s meeting. A May 10th memo from the Conservation Agent urged the board to appoint the second anyway:

given the deadlines that the Commission faces we hope that you take our recommendation into high regard and offer his appointment before our next meeting on May 30th and any questions you may have for him be resolved prior to that meeting.

It may seem that the natural thing would be to fill the vacant seat with the volunteer who was able to appear on Tuesday and wait until June to replace one of the outgoing members. But Possemato pointed out that a new member can’t sit on anything that already had more than one previous hearing.

Given the scale of Park Central, it is likely that the hearing opening next week will continue into June and beyond. And based on the projects controversial history, starting with as close to a full committee as possible seems critical. (There was a lot of controversy over Zoning Board of Appeal hearings that dwindled down to oversight by only 3 members. In fact, that number was cited as a key complaint in at least one of the court appeals.)

To avoid a problem, outgoing member Mark Pietrewicz volunteered to vacate his seat mid-May. Since the other outgoing member is staying on to the end of term – I presume the turnover won’t pose a problem for projects that were already in front of the commission. (Though, it may add pressure to wrap those up by June.)

On Tuesday night, selectmen interviewed Sheri Widdiss, a Southborough resident who works as an assistant to Westborough’s Conservation Commission. She told the board her special interest is in Stormwater Management. She conducts all of the stormwater inspections for the Town. She then meets with owners/property managers to go over what they need to do to maintain them to be in compliance with bylaws.

Widiss explained that it’s a job she “fell into”. She started as an admin for the department. Her interest drove her to push to get more deeply involved. In July, she’ll step up to the Assistant Conservation Officer.

Selectmen and Possemato were grateful for the expertise she could bring to the board. She was voted in unanimously. Via consent agenda, selectmen also appointed Jeffrey Peet at the recommendation of the commission. His volunteer form told the board:

I’ve always believed in serving environmental causes . . . I don’t have meaningful experience or training in the technical areas of interest to the Southborough Conservation Commission; however, given the opportunity to serve, I believe I could learn quickly from the current members and via the resources made available by the Massachusetts Association of Conservation Commissioners.

The Conservation Hearing is scheduled to open at 7:30 pm on Thursday, May 30th in the Town House Hearing Room. After the developer gets approval from Conservation it will then be expected to return to the Planning Board for Site Plan approval.

Meanwhile, multiple appeals are still playing out in the court system. The Land Court’s docket shows a May 7th update from lawyers on the developer’s appeal against a ZBA decision,

Status conference held by phone with Attorneys Click and Cipriano participating. Attorney Cipriano advised that the extensive modified plan submitted under the Wetlands Protection Act is now pending review before the Town Conservation Commission, with a public hearing scheduled for May 30, 2019. Attorney Click [representing plaintiff Depietri] also noted two related cases pending in Worcester Superior Court, with one under advisement on summary judgment, and one up on appeal with arguments scheduled in June. Parties to submit joint report by September 8, 2019 that indicates status of this case and all related matters. Telephonic status conference to follow on September 17, 2019 at 9:30am.

*Updated (5/24/19 8:10 am): A commenter pointed out that the image top right has an incorrect compass rose. North is actually to the left. The plans are correct within the developer’s detailed document. This image was cropped from the cover sheet.

Updated (5/28/19 8:42 am): This morning, I received an email from the Town’s Conservation Agent, Melissa Danza. She asked me to update readers that the hearing for Park Central is being postponed to June 20th at the applicant’s request.

Odd that the compass rose on the plan (to the right) is wrong. North is to the left.

That was my first impression, too. But I assumed I was wrong and didn’t dig in – after all these are from the developers’ engineer’s plans. But you’re correct.

I took the images that decorated the cover. I guess someone was sloppy on that detail. Taking a second look, on subsequent pages with zoomed in plan detail, the compass rose is correctly oriented with North to the left.